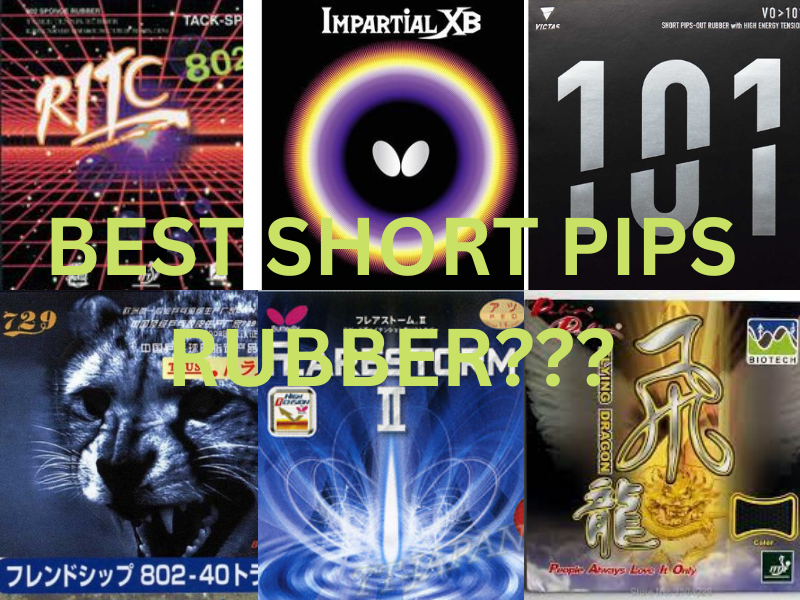 Table tennis is an intense and exciting sport, so having the right equipment is essential for successful gameplay. Short pips rubbers can be an excellent option for players looking to gain an edge in their game. Suitable short pips rubbers provide players with better ball control, spin reversals, deceptive shots, and more.

You can click and read this blog to know how to play with short pips.

The use of short pips rubbers has largely been associated with penhold playing styles since it takes advantage of the sharp angle spin that is used for classic Chinese table tennis play.

However, a new trend has arisen among the offensive players, making use of short pimple rubber on their forehand attack. This rubber creates a much faster racquet response and puts the ball into more spin when attacked by opponents from around the world.

It has become extremely popular as it allows one to develop alternatives in their game in order to compete in different types of matches against different opponents.

There are lots of world-known short pips players such as Liu Guoliang, Deng Yaping, He Zhiwen, Mima Ito, Ni Xialiang, etc. So in this blog, we shall introduce you to several best short pips rubbers in table tennis.

The Butterfly IMPARTIAL XB rubber slides flawlessly on quick transitions with its dynamic balance of power, speed, and spin. XB stands for Extra Balance, a system that results in a competitive combination of cylindrical and trapezoidal particles.

The pellet’s elasticity makes it highly malleable, allowing users to feel its softness and control under various degrees of force applied. Drafted at a ratio by the natural arrangement of the pellet and the system within it, this table tennis rubber is built to perform – whether offensively or defensively – while giving players an edge in any game. 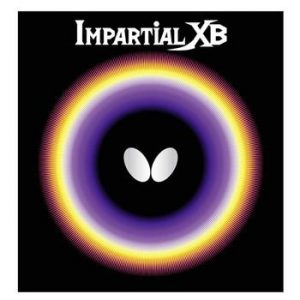 When using the Butterfly IMPARTIAL XB rubber, players maximize their capabilities through small movements and fine-tuning of the ball. The speed of the rubber is fast, providing an advantage while defending, and the rebounding power is sufficient.

The texture of the pellets themselves allows for manipulation when undergoing smaller forces so that players can easily control each movement. Additionally, with its notable drop capability, this rubber catches onto a strong rotating ball.

The Friendship RITC 802-40 is a phenomenally popular table tennis equipment well known for its vertical pips. As a result, it’s favored by professional players from all corners of the globe, especially those Chinese players who have found that it produces proficiently precise and powerful attacks as well as being proficient in countering incoming spin. 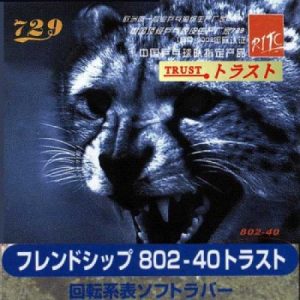 However, RITC 802-40 is quite old rubber so the Friendship Company developed a new version that is called RITC 802-40 Trust. Basically, these two rubbers are similar but the 802-40 trust has better speed and spin.

Professional players love using this short pips rubber because it enables efficient attack play and make it suitable for both backhand and forehand strike. It has an interesting spin sensitivity that can be taken advantage of depending on the incoming spin during gameplay. 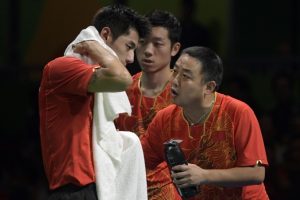 Friendship RITC 802-40 Trust has been used by many penhold players like Liu Guoliang. 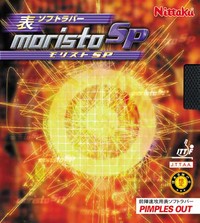 This rubber provides powerful attack shots, as well as amazing blocking capabilities due to its super-elasticity, making it an ideal choice for those who want to dominate their opponents with relentless exchanges. Its speed gives you the edge needed in close matches, allowing you to take control of the game and hit shots previously thought impossible with other rubbers.

The most well-known user of this rubber is the Japanese player Mima Ito, who is famous for her violent and powerful forehand. 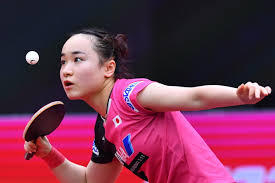 The new Victas VO> 101 is great short pips rubber that features built-in High Energy Tension Technology, making it both incredibly fast and capable of generating powerful spin. The sheer speed of the rubber makes it difficult to defend against, as balls that otherwise would have been easy blocks take off from the table before your paddle is able to react. 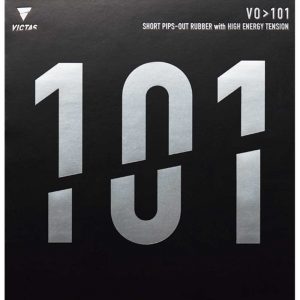 Made with the expertise of both Japanese and German researchers, this high-tech rubber features an optimized pips geometry which gives it great pips-out effects and a flat trajectory that will pressure unsuspecting opponents.

Tibhar Speedy Soft XD is the perfect rubber for competitive table tennis players who crave complete control of the ball. This combination of catapult-rich sponge and wide pimples on the rubber surface offers a multitude of advantages. 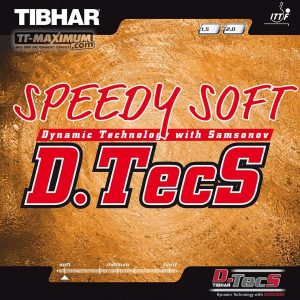 Not only does it provide speedy balls during open play, but its high portion of integrated natural rubber and high elasticity of the pimple rubber also produce more spin and better control than ever before.

Also, we recommend it as a backhand short pips rubber also because some players like to use pimple rubbers to chop. So if you are a chopper, then this rubber is also a great choice for both blocking and chopping. You can choose the way to return the ball according to the distance to the table.

This rubber has great control

Yinhe Uranus Poly is an amazing new rubber specifically designed for the current rules and the brand-new non-celluloid ball.

The world of table tennis was shaken up after the change of ping pong balls, but Yinhe has responded with a superior replacement that expertly harnesses the underlying tensor effect in order to maximize speed and control. 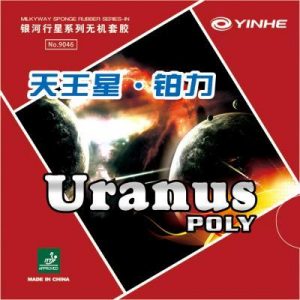 Players who prefer pips-out styles will be ecstatic after trying it: Uranus Poly provides faster rebounds than before, better ball contact, and improved arc generation, ultimately allowing players to become more aggressive in their offense.

Yinhe Uranus Poly makes it light and unpredictable, presenting an elusive challenge to other players.

TSP SUPER SPINPIPS CHOP 2 is an advanced spinning rubber that combines defense, chopping, spin, and stability. It is made of a new ultra-soft sponge to give players maximum control over their opponent’s power shots. 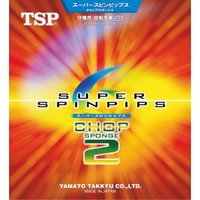 This rubber was developed by the legendary Japanese chipper Koji Matsushita and has achieved great success in the hands of Yuto Matsumura one of the world’s leading choppers.

With the TSP Super Spinpips Chop 2, it is easy for any player to chop the spinning ball as you are guaranteed full control over your shots thanks to the softer sponge which absorbs most of the energy from your opponent’s attack.

Friendship 802 is an amazing short pips rubber for serious choppers, as it boasts superb elasticity, fast speed, and high levels of friction to boost spin and give you maximum control of the ball. I personally recommend that people use a sponge of 1.0mm as it has a better feeling when you chop far away from the table. 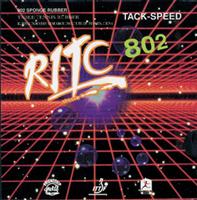 The higher speed provided by Friendship 802 gives choppers just the right amount of pushback when defending, allowing them to stay in even with more offensive players and create offense from defense. Its versatility means it makes for a great partner at close tables with double-sided attacks or your signature left push-right attack playstyle.

Basically speaking, if we want to find a proper short pips rubber for chopping, then we better find one that is relatively soft. 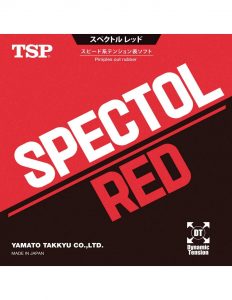 TSP Spectol is an amazing short pips rubber, packed with features that make it versatile and highly effective. For the modern defender, its control in every shot ranges from chops to push blocks and flat hits. This, combined with its ability to generate a wide variety of spin variations makes TSP Spectol a truly enjoyable and useful piece of equipment.

Personally speaking, I suggest that people use a 1.5mm sponge to chop because the rubber can grab the ball well and generate more spin.

It is well-known that short pips rubbers have the defects of less spin. The Palio Flying Dragon rubber helps restore the effectiveness of the traditional Chinese fast-attacking method with greater spin. 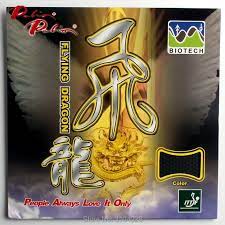 The special needle-like single crystalline additive of Japan’s epoch-making PANA-TENTRA in the formula of flying dragon rubbers is designed to improve the dynamic friction coefficient, resistance, and stability of the rubber surface.

This unique combination results in a powerful but stable spin, plus a surprising amount of speed from its internal energy. Players can even approach the spin level of reverse rubbers all while maintaining the properties of positive stickers.

As it compensates for previously identified defects in spin, this new short pips rubber offers an exciting alternative to current rubbers – making it an ideal choice for those looking to master their gameplay.

Butterfly Flarestorm 2 is a rubber with powerful speed, precise acceleration, and devastating attack capabilities. Hitting the ball at rapid speed can deny opponents offensive onslaughts easily and open up opportunities to take advantage of opponents through counter-attacks. 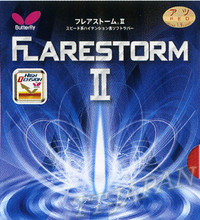 Defending against your opponent’s plays can require accuracy and assertiveness to outwit them, and the soft design of this rubber allows players to have strong control during defensive shots.

Butterfly Challenger Attack has a great balance between offense and defense. Its unique properties provide control in a variety of hitting angles. With great speed and spin induced by controlled strokes and a soft, yet surprisingly deceptive touch, it allows for smooth and easy blocking and hitting alike. Many people use it as a defensive backhand rubber because it has a nice soft controllable touch, which makes hitting and blocking go easy. This is perfect for pips-out players who are looking for added spin variation and greater control over the opponent’s shots.

Short pips rubbers are one of the trickiest and most unique pieces of equipment in all of table tennis. With their small, irregularly-shaped rubber spikes, they provide a very unpredictable spin when the ball is hit.

This is due to the reversed spin technique that short pips encourage—by slightly brushing back against incoming shots, a player can make quick changes to the direction and speed of the opponent’s return.

Players have to choose the correct and proper short pips rubber according to their playstyle and preference.

What is your favorite short pips rubber? Please leave your comment below!