In recent years, table tennis robots have become increasingly popular among ping-pong enthusiasts of all abilities. These high-tech machines can shoot balls at a variety of speeds and spin rates, allowing players to practice their strokes against a consistent opponent. But can a table tennis robot really help you improve your game?

Generally speaking, a table tennis robot can definitely help you improve your basic skills like forehand, backhand, footsteps, etc. In fact, when you play with a table tennis robot, you don’t have to worry about making mistakes. You can just focus on connecting with the ball and perfecting your strokes.

This is because the robot will always give you the same shot, with the same spin, at the same speed. As a result, you can quickly “groove” your strokes and develop muscle memory. In addition, table tennis robots are great for practicing specific shots or routines.

For example, if you’re struggling to master a backhand loop, you can program the robot to feed you backhand topspin shots over and over again. 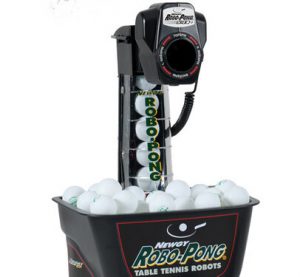 What is a Table Tennis robot?

A table tennis robot is a device that enables a person to play table tennis against an automated opponent. These robots are usually controlled by a computer, and they can be programmed to mimic the playing styles of real-life table tennis champions.

Some of the more advanced table tennis robots can even generate their own spin on the ball, making them even more challenging to beat. While table tennis robots are not yet widespread, they are becoming increasingly popular, especially among those who want to improve their game.

In addition to providing a fun and challenging opponent, table tennis robots can also help players to practice specific strokes and improve their overall technique.

Generally speaking, there are 3 main elements of a table tennis robot:

How do table tennis robots work?

Most table tennis robots consist of a base unit that holds a supply of balls, a net to catch the balls and one or more arms that launch the balls toward the other side of the table. The arms are typically controlled by a computer programmed to perform different shots.

For instance, some robots can perform topspin or backspin strokes, while others can vary the placement of shots. By combining different types of strokes, table tennis robots can provide a realistic practice experience for players. And with the ability to adjust variables like speed and spin, these machines can be customized to help players improve their skills.

3 great benefits of training with a table tennis robot

While table tennis robots are often used to simulate game conditions, they can also be helpful for players looking to improve their skills.

By programming the robot to perform specific training drills, players can work on their footwork, reflexes, and shot placement. In addition, table tennis robots can be adjusted to match the speed and spin of different players, making them ideal training partners for players of all levels.

Although table tennis robots can be expensive, they offer a level of customization and flexibility that is unmatched by any other training tool. By replicating the same shot over and over again, you can train your muscles to react automatically and improve your hand-eye coordination.

2)Practice the specific shots or your weakness

Table tennis robots are also great for practicing specific shots or sequences that you may find challenging. By breaking down the shot into small steps, you can gradually build up your proficiency and confidence. Players can work on the same shot over and over again until they have perfected it.

This allows you to build up muscle memory so that when you’re in a game situation, you’ll be able to execute the shot perfectly. A table tennis robot can also help you to improve your footwork and reflexes.

You can set it up to fire the ball at different speeds and angles, and this will force you to move quickly and react accurately. By using a table tennis robot on a regular basis, you’ll soon see a significant improvement in your overall game.

3)Practice it at home and less expensive

Robots are less expensive than human coaches, and they never get tired of hitting the ball. In addition, they can be programmed to mimic the playing style of any opponent, making them ideal practice partners. So investing in a table tennis robot is a more cost-effective way to improve your game.

But it is important to remember that it is not a replacement for training with a coach or another person. One of the main benefits of table tennis is the opportunity to develop your strategic thinking and quick reflexes. Playing against a robot does not give you the same opportunity to think strategically, since the robot always follows the same pattern.

What can’t a table tennis robot do?

There is no doubt that table tennis robots can be an invaluable tool for practicing specific strokes and developing muscle memory. However, some experts believe that these machines may actually have a negative effect on players’ overall game.

So what are the things that a table tennis robot cannot do?

One issue is that table tennis robots do not simulate the randomness of real-life opponents, meaning that players may become too reliant on predicting their movements. As a result, players may struggle to adapt when they come up against a more unpredictable opponent.

Additionally, table tennis robots tend to encourage solo practice, which can limit players’ opportunities to develop important social skills such as teamwork. Especially when it comes to doubles matches.

Finally,  a table tennis robot cannot generate the same level of spin as a human player. This is because they lack the ability to wrist the paddle in the same way. As a result, their shots tend to be more predictable and easier to return. 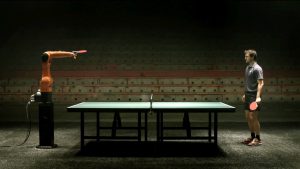 How do you practice a ping pong robot?

In this part, I am going to propose a 5-step workflow to help you train table tennis with a robot.

1)Make a plan and set up the program

The first step is to make a plan. Decide what drills you want to do and how long you want to spend on each one. Forehand loop? Backhand drive? Or backhand chop? It’s also important to set goals for each drill so that you can measure your progress over time. You can set, for example, one forehand drive and two backhand loops and 5 minutes as a set. For me, 5 minutes of continuous hitting the ball would make me exhausted and it’s my limit!

You can make a reference here: How to do topspin forehand?

As you become more comfortable hitting the ball, you can start to increase the speed that the balls are fed to you. The next step is to start introducing spin to the ball.

The machine should be able to give topspin, backspin, and sidespin. Again, start with slower speeds and gradually increase the speed. The last element is placement.

The machine should be able to vary where the ball hits the table – wide on your forehand or backhand, deep in your court, or short near the net. By varying all these factors, you can create drills that simulate real game situations and help you improve your skills.

The best way to practice against a ping-pong robot is to simulate real games. This means picturing a real opponent on the other side of the table and setting up scenarios that they often play. For example, you might set up a situation where the opponent serves to your forehand, followed by a consistent rally to your backhand, and then a fast punch to the middle.

By keeping score and trying to beat your previous best, you can gradually improve your skills and start winning more simulated games. In addition, it can be helpful to watch videos of real matches, and even practice against a human opponent if possible. By simulating real games, you can give yourself the best chance of success when playing against a ping pong robot.

4)Count the hits and do an analysis

When practicing with a ping pong robot, it is important to keep track of your progress and success rate. This can be done by counting the number of hits you make during a practice session. By analyzing your performance, you can identify areas that need improvement and work on them accordingly.

By constantly evaluating their performance, players can ensure that they are making the most of their practice time and improving their skills.

Pay attention to the trajectory of the ball and try to hit it in different areas of the table. After a few minutes, stop and examine your results through videos.

Were you able to hit the ball consistently? Where did most of your shots land? Based on your analysis, make adjustments to your positioning and technique.

Then, continue practicing until you feel confident in your ability to hit the ball consistently in all areas of the table. This is an overall and important workflow for players training with a table tennis robot.

In general, while table tennis robots may have some benefits, it’s important to use them wisely if you want to improve your game. Make sure to mix up your practice sessions by playing with different people, and don’t be afraid to experiment and try new things. After all, the best way to improve your ping-pong skills is still by getting out there and playing as much as you can.