At the beginning of September 2020, the Butterfly Company announced the launch of the Lin Gaoyuan Super ZLC quite suddenly without any promotion.

This is Butterfly’s fourth Super series blade after Jun Mizutani Super ZLC, Zhang Jike Super ALC, and Harimoto Innerforce Super ZLC. Now the super series set has welcomed another new member. How does this blade really perform? What is the difference between it and the previous one, Lin Gaoyuan ZLC?

I wonder if foreign fans know and are familiar with Lin Gaoyuan. Unlike Zhang Jike, Ma Long, or Xu Xin, who are world-famous world champions, Lin Gaoyuan does not seem to be very impressive, and he has not won many championships like them.

Lin Gaoyuan, who was born in Shenzhen, Guangdong in 1995, was officially selected for the national team on April 30, 2009. It has been thirteen years since then until now. At that time, he was a carefree teenager, 14 years old; now he is 27 years old. He will soon become a veteran, facing problems such as retirement. On April 30, 2022, it happened to be the 13th anniversary of Lin Gaoyuan’s selection into the national team. He specially wrote a post on Weibo(the Chinese version of Twitter) with emotion.

He said: It has been 13 years since I came to this glorious group, and now I am the only one left. Sports are full of challenges and cruelty. Only by working hard can we go further! I wish the previous teammates to create greater glories in their careers!

Generally speaking, he belongs to the non-retraction playstyle with great speed. He stands close to the stage and is good at killing the game in the first three strokes. Lin Gaoyuan’s special skills are very prominent, which is reflected in the advanced backhand attack and defense system.

In particular, the flick in the net zone and the counter-looping in the middle court are used very frequently. With the great change of placement, it has become an effective means of scoring for him. However, Lin’s forehand is a relatively weak part, and it is easier to make mistakes and lose points once he enters the loop rallies with opponents.

The weight of Lin Gaoyuan szlc is 94 grams and the thickness is 5.56mm, which shows that the blade is moderately thick but still heavy. You may have soreness in the small arms during continuous pooling in games.

The structure of the Lin Gaoyuan szlc and Zhang Jike Super ALC is the same, both have a symmetrical 5+2 structure, with a koto and Ayous surface, as well as a paulownia core inside. In the playtest, the overall feel is not as hard as the Zhang Jike super alc.

The feeling is somewhere like between Zhang Jike Super ALC and Jun Mizutani Super ZLC, with a springy feel without losing softness. Everything seems perfect. 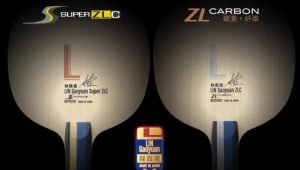 Attacking in the short and middle court can still give the opponent a very strong speed pressure. After hitting the ball, the ball will leave the blade extremely quickly and gain super-fast initial speed. The disadvantage is that it is not easy to get the feeling of penetrating the blade under small and medium strength.

If you want to experience its advantage in absolute speed, you need great strength, or you can try to match the paddle with relatively softer rubbers. 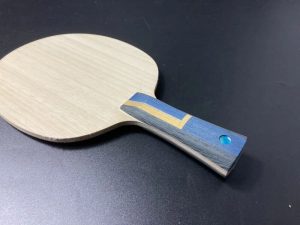 The deformation of this blade is quite great, but it is a little bit difficult to get the feeling of “penetration”. In fact, the blade can wrap the ball perfectly under great force when looping in the middle or back court. It feels like an inner carbon blade such as W968. Amazingly, at the same time, it has a great speed of the outer carbon blade such as Viscaria.

Compared with Jun Mizutani Super ZLC, it requires more strength when doing loops or smashes. Especially when looping far away from the table, it has a consistent and huge amount of spin. Zhang Jike Super ALC performs badly in this aspect as its spin is not as strong as those blades above.

Generally speaking, Lin Gaoyuan Super ZLC is a blade with great speed and strong spin. You can press the opponent with fast-speed smashes in the short or middle court, and at the same time, you can also loop with a long and curved arc in the back court.

However, it is not suggested that match with too hard rubber. As the paddle itself is a little hard, it is recommended to use tacky rubbers like DHS skyline 3. If you want to pair it with non-tacky rubber, it’s better to choose rubbers like Elp, which has better control and spin but at the same time is medium-hard.

In some small games, the control under a small force is decent. It is more like Lin Gaoyuan ZLC or Harimoto Innerforce Super ZLC. The drop-shots, as well as short pushes, are quite stable, and flicks also have great speed. But the control of placement is not so satisfying.

As we mentioned once the blade performs badly under middle force and it only has better control in specific situations. Thus, it requires the great ability of the players themselves, and it is more suitable for higher-level players. Or as we mentioned, by matching the correct rubber to make up for the lack of control under the medium power of the blade.

The overall performance is somewhat similar to Zhang Jike Super ALC, and stable defensive control is not the characteristic of this paddle. Generally speaking, this blade is not quite thick and it’s not a good defensive or controlled one. 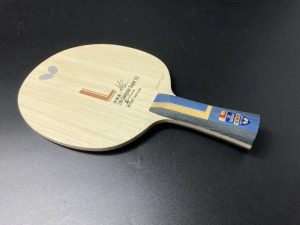 It is suitable for enthusiasts who have good control ability and want to pursue more powerful and explosive attacks.

If you are crazy about looping or smashing, then choose a proper rubber, and the blade will give you maximum power to kill the opponent.

It is suitable for enthusiasts with excellent basic skills, and can fully exert the most authentic offensive performance of the blade.

It is suitable for the majority of amateurs. The perfect combination of the hardness of the blade and the medium hardness of the rubber will make the racket more well-balanced. 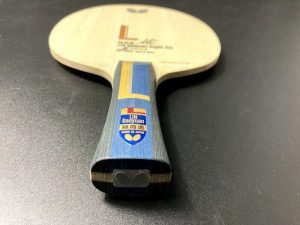 Lin Gaoyuan Super ZLC is generally an offensive blade that is similar to Zhang Jike Super ALC. It has the speed of the outer carbon blade and the spin of the inner carbon blade. It is proper for looping in both short and middle court.

Although the speed is not as fast as Zhang Jike Super ALC, it has a better spin and a bigger attack range. The comprehensive performance is better than Harimoto Innerforce Super ZLC but requires quite great basic skills of the players. So this blade is also not friendly to beginners.