In previous blogs, we have covered some of the classic pure wood blades such as the Maze Advance, Stiga Rosewood series, and many others. Loads of readers have asked me to do a review of the Stiga Ebenholz NCT VII, which is also a classic from Stiga.

As we all know, the Swedish company has always been known for its high-quality blades and its progressive research and advanced technology with close cooperation with the Chinese National Team.

One of its masterpieces is the Clipper, which was produced 40 years ago and is still used by many professional players today. The Clipper is considered to be the most suitable paddle for short pips. So when it comes to this new blade made of ebony wood, what is its unique characteristic? Let’s have a look!

Who use Stiga Ebenholz NCT VII?

Among the many star players, the most famous user has to be the former Chinese table tennis player Chen Qi. He was one of the few ultra-violent players in the Chinese national team, playing with exceptional ferocity. He often uses his devastating forehand loops and super fast backhand drives to finish off rallies. The extremely offensive playstyle makes loads of his opponents struggle to defend him. Despite the fact that he was sponsored by Killerspin, he has been using Siga Ebenholz NCT VII until his retirement. The Stiga Ebenholz nct vii is a 7-ply pure wood blade that weighs approximately 96 grams and is 6.11 mm thick. As you can see the thickness is moderate but it’s quite heavy.

According to the promotion by Stiga, the blade has high-quality and hand-selected ebony out plies so the blade is also extremely hard and has great speed. There is a thin core made of ayous wood surrounded by brown-dyed plies, thick penultimate plies, and finally thin ebony flies.

Unlike solid-colored blades like the Joola X7, the Stiga Ebenhoolz nct vii looks stunningly beautiful. The entire surface is very smooth and has amazing vertical grain in dark-brown tones.

The handle is made up of brown and gold elements with a metal label for a very elegant look, showing that the build-quality of Stiga Company is really excellent. Of course, the blade itself is kind of head-heavy, so I suppose that my arm will get fatigued when doing constant looping in the playtest.

In terms of speed, Stiga Ebenholz NCT VII is not inferior to Butterfly Zhang Jike ALC or w968. When flicking or smashing in the short court, the balls go super fast. The balls are quite powerful due to the head-oriented gravity and the hardness of the ebony.

As long as you know how to loop the ball with the correct motion under great force, the blade performs much better than W968 or Zhang Jike ALC. However, Ebenholz ECT VII has a lower fault tolerance so you have to use the correct bat angle and it requires a more wristy and upward motion.

This is because the ball has a relatively low arc and if you loop the ball as other blades, it’s easier to make mistakes and lose the game. The deformation of this blade is not as big as imagined, and the support for the ball in the middle court is also very good. Unlike other pure wood blades that lack strength in the middle court, Ebenholz ETC VII seems to have plenty of power. We still think the excellent speed makes up for the lack of deformation.

Therefore, in the middle or back court, the ball needs to be well-wrapped to generate a stronger spin, which is difficult to control. As we mentioned, the loops in the back court require proper timing and proper bat angle.

If there is a little flaw in the action, the ball may drift off the end of the table. As the margin for error is quite small, there is an obvious difference with those blades with carbon fiber when we attack far from the table.

Compared with Rosewood NCT V, Ebenholz ETC VII has better control on drop-shots or short pushes. Sometimes the strikes are spinny and flat, which is quite difficult for your opponent to return.

However, there is a still gap with W968, and also is not as stable as Zhang Jike ALC. So if you want great ball control with this blade, you’d better match it with a softer rubber so that the ball will not bounce out and can be placed as you wish. sI has the same performance as W968 and Zhang Jike ALC in terms of defense. The ball can be blocked back consistently in any direction with passive blocks. And the ball can gain an acceleration with the motion of the wrist when doing active blocks.

However, paired with Donic F1, the defense is much more offensive and sometimes it’s difficult to control the ball as I expect. Therefore, the defensive feeling of Ebenholz ETC VII is far less stable than that of W968. We can say this is not a controlled or defensive blade.

But amazingly, the counter-looping is quite great as the blade can absorb the impact or energy of the incoming ball. And it can generate flat and long trajectories.

This blade is more suitable for high-level players with good basic skills. Those with less power and less standard motions may not be able to experience the thrill and fast speed of this blade.

So it is not recommended for beginners. But for attackers who prefer powerful and explosive loops, flat hits, as well as quick smashes. You may kill the match within the first three strokes.

This paddle should not be paired with rubbers that are too elastic (like T05, T64). If you are an offensive player, it is not recommended to pair it with DHS Hurricane. But if you must, it should not be too hard. Personally speaking, I suppose that 39 degrees or even 38 degrees are recommended.

For the backhand, a softer rubber is also suggested, such as Butterfly Rozena, which has a higher fault tolerance). In our opinion, the best solution for this blade is to have good ball handling on the forehand and backhand and match with soft or medium-soft rubbers to minimize the hardness and head-heavy feeling. 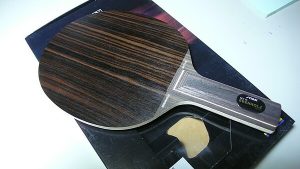 Stiga Ebenholz NCT VII is a relatively heavy blade that has amazing speed when playing near the table. The blade has good feedback and clearly feels when hitting the ball. But the arc is relatively low and the blade itself forgives less of incorrect bat angle or wristy motions.

So if you are the player who has decent techniques or you are an all-out attacker like Chen Qi, then you could probably try this paddle. I suppose your opponent could not return your powerful and violent smashes and loops easily.