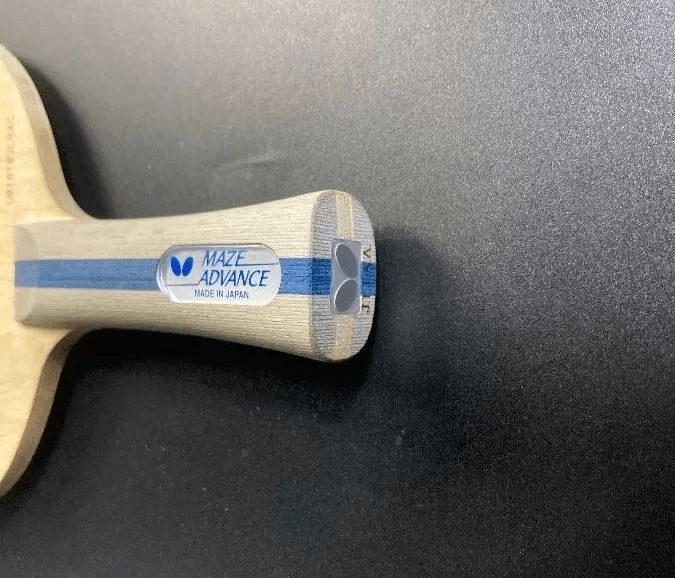 After entering the era of 40+ balls, the traditional five-ply pure wood blade is no longer suitable for the most advanced table tennis games as it lacks sufficient top power. So 5-ply wood with 2-ply carbon fiber and 7-ply wood structures become much more popular these days.

Compared with those blades with carbon fiber, 5-ply pure wood blades have a clearer feel and better control, so they are quite popular among amateur table tennis players. Some classic ones include Stiga CLCR, Stiga Rosewood NCT VII, etc.

In this blog, we will introduce you Maze Advance blade released by Butterfly Company in 2021, which is also a 5-ply wood one.

Michael Maze is a professional table tennis player from Denmark. He began playing at the age of four and was soon recognized as a talented player. He turned professional in 2000 and has since won numerous tournaments, including the World Cup, European Championships, and Pro Tour Grand Finals.

Maze is known for his aggressive style of play, and his quick reflexes have earned him the nickname “The Human Cat.” In addition to his success on the professional circuit, Maze has also represented Denmark at the Olympic Games, where he won a bronze medal in 2008. 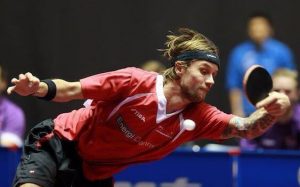 In addition to his successful career as a player, Maze has also been coaching young players in recent years. He currently runs his own table tennis academy in Copenhagen, where he helps to develop the next generation of Danish table tennis stars.

Michael Maze is a true ambassador for the sport of table tennis, and he continues to inspire players of all levels with his passion for the game.

One important factor in choosing a table tennis blade is the material it is made of. There are blades made of different kinds of wood, as well as blades that are a composite of wood and other materials. Some players prefer pure wood blades because they believe that these provide the best performance.

Players can get a better sense of the ball when they make contact, which can help them to place their shots more accurately. In addition, pure wood blades are often lighter than composite blades, making them easier to maneuver.

Let’s now have a look at the Butterfly official promotion: MAZE Advance (new version) is an upgraded version of MAZE Performance (old version), because of its moderate elasticity, it is suitable for various play styles in the games. Especially it is recommended for those players who have a great balance between attack and defense.

It can be observed that the structure of this version is exactly the same as that of the old one, but compared to the Maze Performance, the Maze Advance has a thicker core and a lighter weight. So can this blade be a powerful weapon in the era of 40+?

The thickness of Maze Advance is 6.76mm and the weight is 83g. It can be seen that the board is really thick but not heavy at the same time. The handle is really comfortable to hold and it gives players a stable and wonderful feeling when hitting the ball. It’s like you’re in control of the whole game.

The speed of Maze Advance is quite a bit slower than most blades with carbon fiber. But it is the same with Stiga CLCR, the ball leaves the blade not so quickly and it’s quite stable.

From this point of view, it is recommended to match a rubber with great speed like Butterfly T05, Joola X-Plode, and so on. You can both match such kinds of rubbers in your forehand or backhand and it mainly depends on which part is your strength.

Thus, this type of combination, a stable blade with super fast rubber, is a reasonable choice to optimize the maximum effect of this blade.

In this aspect Maze Advance is unbeatable. You can have a very distinct feeling that the ball is firmly “bitten” by the blade and the ball goes out in a perfect arc.

Just with a little bit of force, you can get the ball to go very firmly and the ball will be placed precisely where you want it to go. The feel deserves super 5 stars and its performance is not like an $80 blade. It´s more grippy and the sponge can hold the ball much better than Stiga CLCR.

So it can generate a huge amount of spin when looping or driving. However, it is not recommended to match with rubbers with strong spin because the balls will lack speed. So it’s better to choose the combination that we have mentioned(stable blade+fast speed rubber). In some short games, this blade has a huge advantage. Especially when we do drop shots or short pushes, we are able to control the placement of the ball precisely.

This is a common characteristic of the 7-ply wood blade such as CLCR or Maze Advance. So it’s a good choice for both defensive and offensive play especially when players play in the short or middle court.

As the blade becomes thicker, it can easily block back the incoming ball. Also, as the paddle can bite the ball well, it can offload the effect of the ball. Without much force, as long as your blade is at the right angle, the ball will fly towards your opponent automatically. 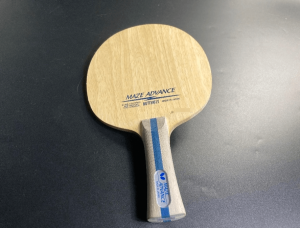 The Maze Advance is suitable for most people, whether you are a beginner that practices your forehand and backhand, or an intermediate player who has already been learning for some time, this is an ideal weapon for you.

Even some professional players who are looking for consistent control in the short and middle court will choose it. The other thing is that a pure wood blade is perfect for choppers.

Previously my favorite blade was CLCR, which has been with me for over 10 years, and now it seems to be a time proper to replace it with Maze Advance.

Version 1(suitable for most amateur players)

Effect: The combination of stable control of the blade and fast-speed rubber enable players to attack consistently in the short and middle court.

Effect: Paired with some harder rubbers, Maze Advance will make your attack more explosive and powerful, but at the same time without losing control.

It can be said that Maze Advance is the most cost-effective pure wood blade. This blade has reached its limit in terms of control. It only takes a little force to gain a very stable biting feeling and stable control.

You can feel that the defense is quite easy when you are faced with the loops or drives from your opponents. The blade can block the ball back automatically with a beautiful arc, which is the biggest advantage of this paddle.

The lack of speed is the only defect of this blade. So normally we choose some fast speed or hard rubber to compensate for it.

Personally, as a chopper, I am quite into this blade and I am already about to replace my CLCR with Maze Advance. The price is really acceptable and if you want more control in your games then maybe you should give it a try.