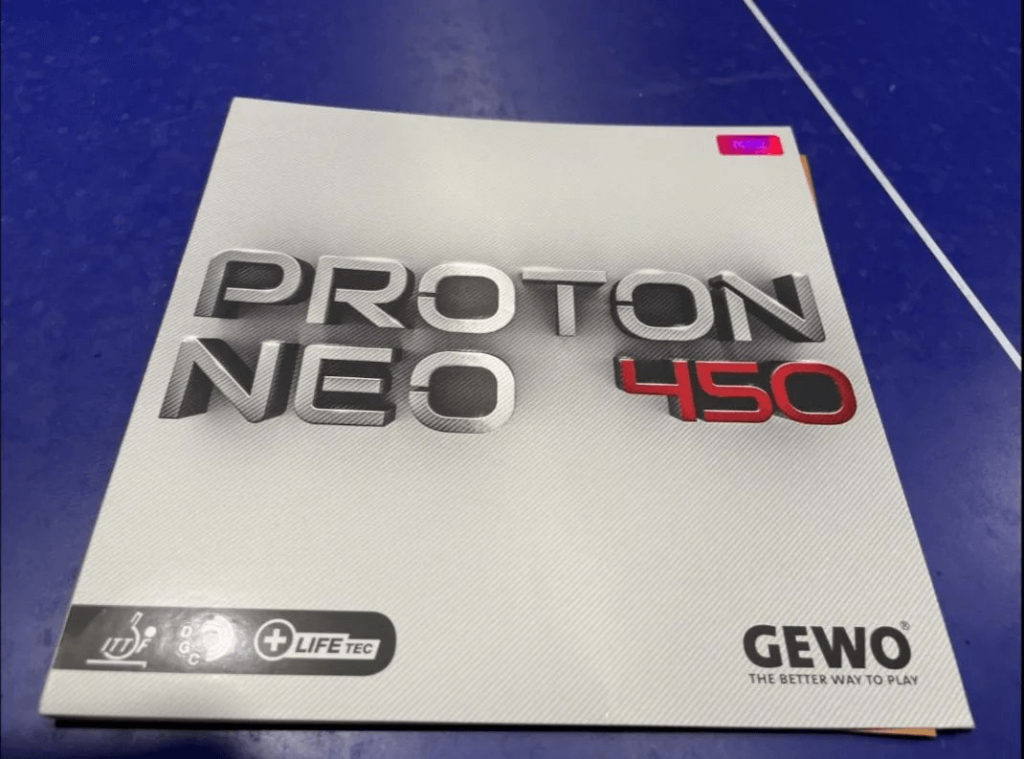 The rubber we are introducing to you today is the Gewo Proton NEO 450. Many of our readers may not have heard of the brand Gewo before and may not know much about this rubber.

But the fact is that Gewo has a long history of development in Europe and this rubber is used by many professional players. Some fans call it “backhand killer”. This blog will give you a deeper insight into the performance of this rubber.

Gewo is an unknown brand in China and loads of Chinese people have never heard of it. To be honest, I was confused about what GEWO was when I saw it in Germany because I had never seen or heard of it in China before.

But Gewo is a professional table tennis equipment brand established in Germany in 1956. In the past few years, it has also signed up some famous table tennis players as its spokespersons. Actually, GEWO is one of the top 6 brands in Germany and many European enthusiasts choose it.

In some places, its status is even higher than Stiga. I was totally impressed by it when I first tried it several years ago.

Gewo Company invites Quadri Aruna as their spokesperson. Aruna is a Nigerian table tennis player. He entered the quarter-finals in the Men’s Singles event at the 2016 Summer Olympics. This is the first time an African athlete has reached the quarter-finals of Olympic games. Despite that he was swept by Ma long, he still wins the respect of people from all over the world. Because of his great performance, Gewo started to cooperate with him.

The Gewo Proton NEO 450 is the hardest rubber in the Proton series with a weight of 49 grams. The tension high-performance sponge guarantees players do aggressive attacking and dangerous blocking. This rubber is an ideal weapon for offensive playstyle. Now let’s have a look at its features. We shall compare it with Donic F1.

In terms of speed, because the rubber of the Proton NEO 450 is harder, the speed of the ball is slightly faster, especially when lifting the backspin ball, the impact is much stronger than that of the Donic F1.

In the playtest, we did not choose the blade with carbon fiber but chose the previous one that we have introduced before, pure 5 ply-wood blade Rosewood NCT V. Although there is no carbon fiber, it can clearly feel that the rubber is very elastic and bouncy, so the speed is still quite fast.

The Proton NEO 450 is more grippy and can catch the ball better than the F1, so it can generate more spin slightly than the F1, but the difference is not very big. In fact, in terms of spin in the games, the role of the rubber is limited, and it more depends on the technical movements of athletes.

It can be obviously observed that the support of F1 is not as good as that of Proton NEO 450. Especially when I play in the middle court and with greater force, F1 cannot give sufficient support, and the ball is easy to fall off the net. In comparison, 450 has stronger support and it gives players more confidence to loops or drives far away from the table.

Both of the two rubbers perform great when lifting the backspin balls. But the difference is that F1 lack sufficient top power and support so it´s better to loop with a higher arc and less force. However, it´s better to loop or drive much more forward if you use Proton NEO 450 as the ball can be much faster and it will be more powerful.

This field is indeed the advantage of F1. The flat strokes are definitely the biggest highlight of this rubber. The sound of hitting the ball is crisp and loud and the first stroke is extremely fast. It is quite easy to experience the difference between these two rubbers. This is also the main reason why many amateurs choose it, as it’s easier to make some high-quality strokes.

On the other hand, Gewo Proton NEO 450 has a metal sound that is slightly lower than that of the F1 under medium and small force, and the speed is also slightly slower. So it’s a disadvantage of Proton NEO 450.

Both these two rubber are really not good to flick, personally speaking, as the balls leave the rubber quickly. The Proton NEO 450 will be better if you lack good control. However, if you can control the ball well, then F1 will be a better choice as you could hit the ball quickly and the ball will gain great speed.

I suppose that nobody will think that F1 has good control. This is basically the most obvious shortcoming for those who have used this rubber. The Proton NEO 450 has the same problem. But the sponge is harder and the ball leaves the paddle much slower under small force. So it performs better when doing some short pushs.

Gewo Proton NEO 450 performs better when it comes to defense. Because the rubber is harder, it has a stronger sense of support when blocking, and it does not need to be very forceful. A little adjustment of the angle can block the opponent’s incoming ball well with precise placement. In this aspect, it has a greater advantage than F1.

Compared with the 450, F1 is at a disadvantage in terms of top power, spin, control, and defense, but it has the upper hand in flat hits. Hits are the absolute advantage of F1 in the era of small balls. But nowadays, when we enter the era of big balls, it is increasingly impossible to kill the opponent with only a fast stroke, so the sponge is harder.

Obviously, The Gewo Proton NEO 450 adapts to the era of big balls. In today’s playstyle, the enhanced control and defense will make it easier to get the victory in games for both amateur and professional players. So I prefer to call the Proton NEO 450 “F1 in the era of 40+ balls” or an enhanced version of F1.

However, compared with the T05, the two rubbers are much worse in all aspects. So the Proton NEO 450 is more friendly to some beginners who just practice table tennis in the short court.