We have introduced two premade ping pong rackets, Stiga Raptor and Stiga Pro Carbon, in our previous blogs. In this blog, we shall talk about a new premade racket, Killerspin jet 800.

Killerspin Jet 800 is a high-performance table tennis paddle that is perfect for serious players who want to take their game to the next level. The paddle is made of premium materials, including a durable carbon fiber face and a comfortable ergonomic grip.

In addition, the Jet 800 features an advanced spin-control system that gives players greater control over the ball. This makes it an ideal paddle for players who want to execute complex shots with precision. 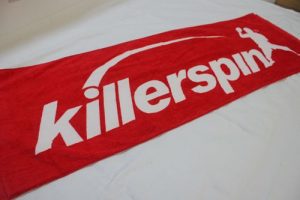 In recent years, the company has launched programs to help develop young players in disadvantaged communities. These programs provide access to equipment, coaching, and competition opportunities for kids who would otherwise not have the chance to play.

Through its commitment to quality products and social responsibility, Killerspin is helping to grow the sport of table tennis around the world.

The whole racket weighs 226 grams, which is almost the heaviest I have tried. As a chopper, I am not used to such heavy rackets as it makes me difficult to reset after each shot. But for those offensive players, heavy blades mean powerful strokes with great speed and impact.

Personally, I am quite into its appearance. The all-black racket has a sleek and modern design, with a glossy finish that really makes it stand out. Especially the orange Killerspin logo is really eye-catching.

The Killerspin Jet800 table tennis bat is made up of seven layers of wood and carbon fiber, giving it a speed rating of 4 out of 5. The blade has a classic 5+2 structure. Five of the layers are made from a kind of wood called plies, while the other two are carbon fiber.

The upper carbon layers give the blade a larger sweet spot and make it an ideal choice for offensive players. The inclusion of carbon fiber helps reduce the bat’s weight without sacrificing power.

In the playtest, we can easily lift up the backspin balls and it has great initial speed. For those intermediate players, if they use it correctly they can kill the games within several strokes.

When looping in the middle court, the carbon can give us sufficient support and it’s proper for players to do consistent topspin loops. The only disadvantage is that it’s easy to get tired after several strokes due to its weight. Killerspin Jet 800 has an ergonomic flared handle and I am really satisfied with it. The flared shape prevents the racket from slipping out of your hand, and the shorter length makes it easier to control. It’s especially suitable for forehand dominant players or Asian players.

The only pity may be that Killerspin Jet 800 only has the FL version but lacks the ST one. A straight handle is more suitable for European players as the shorter handle on the Jet 800 might not suit someone with larger hands. What’s more, the ST handle is quite great for quick conversion of the forehand and backhand.

Killerspin Jet 800 table tennis paddle has 2 Nitrx-4Z rubber sheets that are 2.0mm in depth. The great tension of the rubber makes it easier to play fast-paced games and do quick conversions.

However, the spin generated by the rubber is not as great as it is described on Killerspin’s official web, according to my experience. The rubber fails to wrap the ball well and it cannot give a large amount of spin.

Maybe it’s great to do some flat drives or hits, but if you want to kill your opponent through quite spinny balls, I have to say it’s quite difficult.

Due to its so-so ball-holding performance, the control is not as great as its speed. In some short games, the balls tend to be longer or higher than we expected and it leaves opportunities for opponents. From 0 to 5, I can only give 3.5 to its performance in the spin. In the playtest, we have done an all-around analysis of this racket and we have to say, Killerspin Jet 800 is a high-spin blade that can be used for a variety of strokes. The Jet 800 is focused on delivering maximum power, making it ideal for crushing serves and driving the ball past your opponent.

The blade’s sweet spot is also large, allowing you to generate plenty of power even when your strokes are not perfectly executed. But it also has its problem like lack of spin. So below we list the pros and cons of this ping pong racket.

When it comes to a premade table tennis racket, two of the most popular options on the market are the Killerspin Jet 800 and the Stiga Pro Carbon.  Both paddles offer excellent performance, but there are some key differences between them. The Killerspin Jet 800 has a slightly larger head size, which gives it more power behind shots. As we could see from the table above, both two premade blades have similar structures and are suitable for aggressive players. The main difference between the two paddles is that the Killerspin Jet 800 is for aggressive play and the Stiga Pro Carbon is for players who want more control over their game.

Killerspin Jet 800 can play more powerful strokes due to its weight but lack sufficient speed. It’s quite suitable for those violent players. On the other hand, Stiga Pro Carbon has faster speed and is quite a great choice for loopers as they prefer consistent topspin.

Those who want more control over their game and don’t mind sacrificing some speed for better control should purchase the Stiga Pro Carbon. But for most people, the biggest advantage of Pro Carbon may be its lower price and high cost-effective performance. Many fans are confused about Jet 800 N1 and N2. Actually, The jet N2 is an updated version of N1. While they appear to use the same composite blade, Nitrx-4Z rubbers, and come in the same personalized memory book box, there is some slight difference.

But we suppose that the Jet 800 N1 is slightly faster and more controllable according to the rating. However, unfortunately, this blade can no longer be found in the market as Killerspin no longer produces it anymore. Currently, only Jet 800 N2 is available.

The Killerspin Jet 800 is a table tennis blade that is designed for speed and power. The blade has a unique shape that helps to increase ball spin, and the weight is distributed evenly throughout the paddle, providing excellent control. The Jet 800 also features a comfortable grip that is perfect for players who have large hands.

The large sweet spot on the paddle makes it easier to hit the ball, and the rubber surface provides plenty of friction for spins. Overall, the Jet 800 is a great choice for players who are looking for a powerful table tennis paddle.