I am not sure if you have ever heard of Stiga Raptor. “Stiga Raptor vs Pro Carbon” is often mentioned by people on forums as they are both premade rackets, just as people compare the Butterfly Tenergy series to the Rozena. So which of these two table tennis rackets is more cost-effective?

In this review, I will make an in-depth analysis of Stiga Raptor and cover the difference between the two rackets.

What is a premade blade?

Many fans or beginners may be confused by the concept of “customized blade” and “premade blade“. A premade table tennis blade is a ready-made paddle that usually already has a rubber surface on one or both sides.

Premade paddles are generally less expensive than custom-made paddles and are often used by beginner and intermediate players. The advantage is that players don’t need to glue the rubbers and it’s quite convenient for those beginners.

They are typically lighter and thinner than custom-made paddles, which makes them easier to control. However, the main downside of the premade blade is that it does not offer the same level of customization as other types of blades. So that’s why those professional players often pair the blade and rubbers according to their needs or playstyle.

A quick overview of Stiga Raptor

Stiga Raptor is a premade table tennis bat that is perfect for players who are looking for an all-around option. The bat has a 5-ply construction, with two layers of carbon fiber for added durability and power.

It also features an anatomic handle that provides a comfortable grip and an EVA sponge that gives the bat excellent ball control. The blade has a nice sweet spot, good power, and plenty of control. It is also very light, making it easy to maneuver and approved by ITTF.

At the first look at the Stiga Raptor, I was impressed by its unique design and workmanship. The sleek black paddle has a sharp, futuristic look that is sure to turn heads on the court. The black and red colorway is also really eye-catching. The blade has a larger sweet spot and increasing stiffness due to the outer carbon. Thus, the blade feels a  little bit hard and can generate offensive and impactful strokes.

It’s worth mentioning that Stiga Raptor uses balsa wood in its inner part. Balsa wood is a type of hardwood obtained from the trees in the genus Ochroma. It is known for its soft, porous, and springy nature.

Due to these characteristics, it significantly increases the flexibility of the racket and generates a high amount of spin. Although it is a lightweight material, balsa wood is strong enough to provide ample support, especially when playing far away from the table.

Stiga’s WRB technology is well-known in the table tennis community and is employed in both Stiga Carbon Pro and Stiga Raptor. WRB stands for weight balance, rate of recovery, and ball sensitivity respectively.

Stiga hollowed out the handle to reduce its overall weight, and in the process, shifting the center of gravity of the head. The cross-section of the handle is larger towards the end which makes it comfortable to grip. The reduced weight will be a benefit to most and makes it easier to rotate the ball for topspin strokes.

WRB technology makes it possible for the player to have better control over their shots and maintain a steady balance while playing. WRB also allows for a faster rate of recovery after each shot, so that the player can stay agile and make quick adjustments during gameplay.

Overall speaking, the technology provides an overall enhancement to the game experience, giving players more power and control over their game. Both Stiga Raptor and Stiga Pro Carbon use S5 rubber. As they are both premade rackets, the performance of the two rubbers cannot be compared with T05 or D09C. But stiga uses newly developed ACS and NCT technologies, which is perfect for players who want to generate more speed without sacrificing any control.

ACS Technology → The ACS technology is a process to induce micro air capsules in the sponge which will drastically increase the elasticity of the rubber, allowing the ball to penetrate more into the sponge during impact. The sponge absorbs more energy during impact and then releases that energy in the form of a high-speed, controlled ball.

NCT Technology → NCT (Nano Composite Technology) refers to the use of Nano particles to create a composite material. NCT can be used to tighten the bonding between the molecules of the top sheet.

This makes the rubber more elastic and improves the racket’s ability to generate spin. NCT is an exciting new development in table tennis racket technology and it is sure to improve the game for all players. When it comes to the speed of Stiga Raptor, the overall performance was impressive. We have to say that Stiga Pro Carbon has a faster initial speed and it reigns when playing close to the table. The speed of the first jump is much faster than Stiga Raptor.

However, Stiga Raptor can give more support in the middle court or even further. The ball seems to explode off the table with each hit, and precise placement is possible thanks to the great-feeling handle.

Players can generate more powerful and rapid strokes or heavy loops at a mid-to-far distance from the table. Some slower advanced players might find the sweet spot a little too small for their liking, but it is acceptable for most intermediate players. The racket can warp the ball well and has a good amount of spin, making it perfect for serve and topspin strokes. Some heavy backspin serves can kill your opponents with ease. Due to the fact that this is a top-heavy racket, it’s can generate impactful topspins but also players are much easier to feel tired after consistent loops.

Relatively speaking, Stiga Pro Carbon is more violent and has better performance in generating spinny shots when playing close to the table. But in the middle or back court, Stiga Raptor can generate strokes with a long arc and stronger spin.

Both these two rackets have similar performance in control. We also like the large sweet spot on the paddle, which makes it easier to hit the ball in the center, and a paddle that’s very well-balanced. 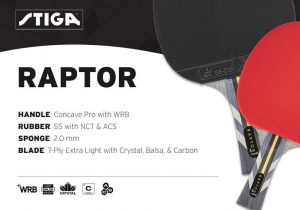 Stiga Raptor is more suitable for offensive players who prefer to loop and win the games through great speed and spin. And if you like looping far away from the table, this blade can give you sufficient support. The Raptor is heavier so the shots are more powerful under the same strength.

Stiga Pro Carbon, as we have mentioned in our previous blog, is more suitable for players who play close to the table. This blade can be quite well-balanced and you can lift up the backspin, loop the ball, block, or even do fast flash hits. Especially for those who have a quick conversion of forehands and backhands, Pro Carbon is absolutely a great choice.

But it should be noted that both rackets are not suitable for very advanced players as we have mentioned, they need to choose or customize their own rubbers according to their needs and play style. But if I have to choose a premade blade, personally, I would choose Stiga Raptor because it’s much cheaper. Stiga Raptor is a table tennis racket that is known for its speed and power. The racket is made with a special type of composite material that helps to increase the speed of the ball.

The result is a faster game with more powerful shots. The racket also has an extra-large sweet spot, which makes it easier to hit the ball with great effects. In addition, the racket comes with a special case that protects it from damage. The Stiga Raptor is a great choice for anyone who wants a fast and powerful table tennis racket.

Those beginners and intermediate players can choose their racket according to their needs between Stiga Carbon Pro and Stiga Raptor. They have similar performance and structure but slight differences.