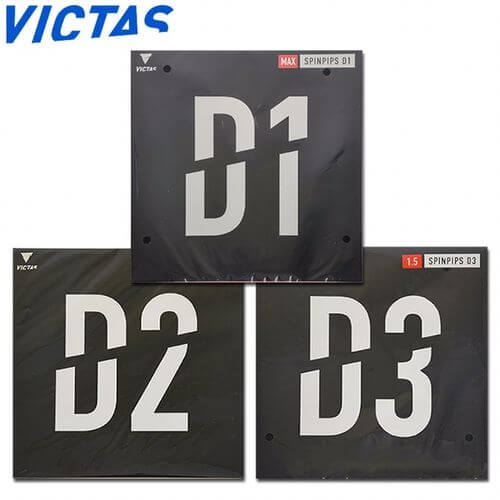 When it comes to the most popular short pip rubbers among professional players, it must be the Spinpips series of TSP. It is the most famous spinning rubber in the world of table tennis and was used by Liu Guoliang, the first Chinese Grand Slam. This history of Victas D1 D2 begins from here.

The Spinpips translates directly as “spin particles”. The super-strong spin is the highlight of the rubber, offering the professional player easier control of the ball and the ability to generate more spins. Generally speaking, after driving the ball, players begin continuous strokes. The classic Spinpips is a must-have for almost all short pips players.

After the merger of the TSP and VICTAS table tennis brands, the original TSP Spinpips became the VICTAS D Series – D1, D2, and D3.

VICTAS D1 and VICTAS D2 are defined as attacking short pips, while D3 is more oriented towards chopping short pips.

The VICTAS D1 is the exact version of the classic Spinpips but only changes the name. It is one of the most powerful rubbers in terms of spin, not only for small arcs but also for very spinning arcs.

In addition, D1 is soft and easily deformable, making it very easy to use, even if you have never played short pips before.

The D2 version is a new VICTAS rubber with a strong attacking bias, maintaining the D1’s excellent spin while replacing it with an internal energy tension sponge with a larger bore, and greater hardness.

In addition, the official retail price of VICTAS D2 is a little more expensive than D1 and D3. This shows how much VICTAS values the D2.

The VICTAS D3, like the VICTAS D1, is an old friend and is the same version of the original TSP Spinpips Chop Sponge2.

The rubber has the same structure as the D1, maintaining the excellent spin, while the sponge is kind of like “Chop Sponge”, which inhibits bounce and has a good offloading effect. It is a great choice for players who use short pips rubber for chopping.

A spinny short pips rubber that boasts a high spin among the VICTAS series. And it has similar well-rounded power and control that is the same as an inverted rubber.

An aggressive rubber that combines the spin properties of the D1 with an internal tension sponge.

Now let’s have a look at the feature of two rubbers:

The speed of the D1 is slightly slower than that of the D2. The D2 is more aggressive and can generate very fast strokes on both the forehand and backhand, which is the characteristic of the rubber. Especially for balls in the net zone, some very fast flicks often leave the opponent defenseless.

This is hard to tell which one has a stronger spin. As both the D1 and the D2 feature this, some people may think that the D1 can generate more spin than the D2, but in fact, after playtest, we found that the difference between the two is not that big.

As we have mentioned in our previous blog, both long pips rubber and short pips rubbers can have great variation of spin. The D1 is more versatile and has a good balance of spin and speed, while the D2 is more aggressive. In the next part of the test, we can see the more subtle differences between the two.

The friction of the D1 is better than the D2, which means the ball has more friction in the rubber and it is easier to drive or loop the backspin balls. However, the D2 doesn’t perform well as the faster speed means more mistakes without great control. So when it often requires better control ability for players when they use D2 to drive looping backspin balls. Well, that also means it’s not suitable for beginners.

When hitting topspin by D1, the ball goes slower and it goes down faster, so the opponent may be confused and can miss it sometimes. But the ball hit by D2 is really fast and has a great bounce. The 2 rubbers get the victory in different ways. D1 relies more on the variation of the spin and rhythm while D2 can be more offensive and has a great impact. Swedish player Mattias Falck uses exactly Victas D2.

As we have mentioned many times, Victas D1 lacks fast speed but performs better in terms of control.

The ball blocked by D1 will have a stronger counter-spin and it can generate more mistakes for opponents in the second or third stroke. While if players use D2 to defend, the balls can be blocked faster and make opponents feel uncomfortable.

Victas D1 is not very difficult to handle and is more suitable for amateurs. Especially those who have never used short pips before, they can choose D1 as their first short pips rubbers. They can control the ball well and master the short pips techniques quickly.

The D2 has a very strong character and is suitable for high-level and offensive players like Mattias Falck nowadays. They have already had a better understanding of short pips. So maybe after you have used D1 for some while and you are accustomed to it, you could give it a try to D2 and decide which one is more suitable for you.

Victas D1 is a well-balanced rubber, with few outstanding points but a good balance in all aspects. It is suitable for players who prefer to control the ball, but not offensive players.

Victas D2, on the other hand, has greater speed and higher quality when hitting the ball, making it suitable for high-level players who want to hit super fast and scary strokes.