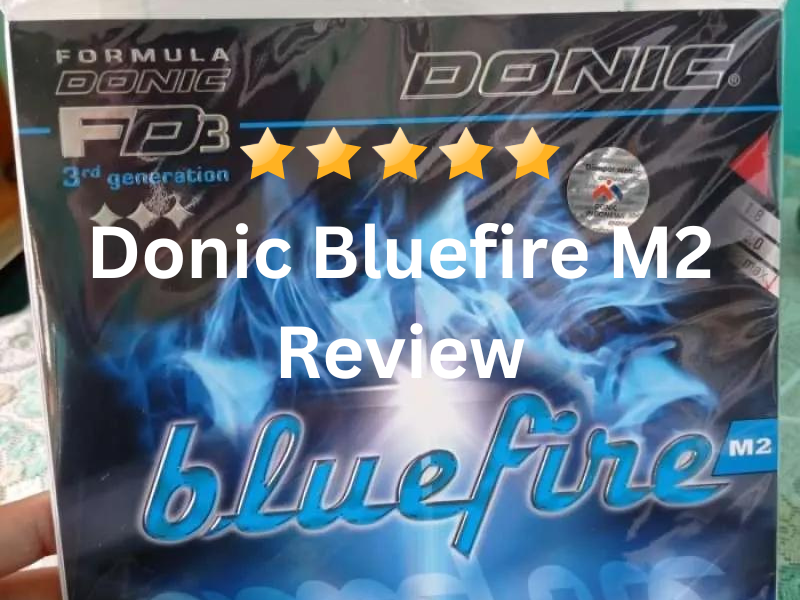 Donic Bluefire M2 is an ideal and popular table tennis rubber in Europe. I have noticed that almost 60% of the players use this rubber for both their forehand and backhand. From an allround+ or offense+ game to a more offensive style, this rubber can keep up no matter the genre of play.

The Donic Bluefire series offers high spin and speed while maintaining great control. It’s a versatile rubber for offensive or all-around playstyle players. So in this blog, we will make an all-around and detailed Donic Bluefire m2 review.

According to our research, the female Croatian player Dorina Srebrnjak is using this rubber for both her forehand and backhand. Her highest ranking is 305 and in fact, she is currently the highest-ranking female using Donic’s Bluefire M2 rubber. 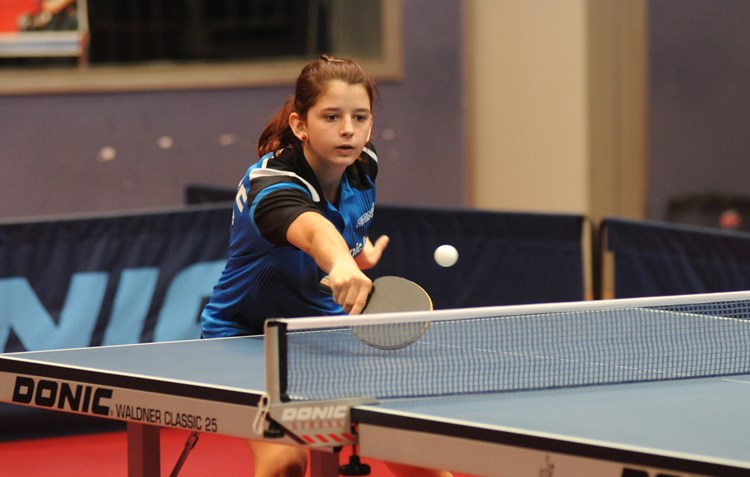 With her powerful forehand and backhand shots enabled by her Ovtcharov Senso V1 blade and Bluefire M2 combination, she has become a formidable opponent at tournaments around the globe.

Padasak Tanviriyavechakul is the male player who uses Donic Bluefire. His match against Lin Yun-Ju in the 2020 WTT world cup is a classical game in his career. We notice that he uses Bluefire M2 on his backhand and Hurricane 3 NEO on his forehand, like most players. Padasak’s latest ranking in 2023 is about 320.

We can easily notice that most top players hardly use this rubber in their formal matches. So what causes it? Is it only rubber for amateur players? Let’s have a look.

Donic Bluefire m2 is well known as it applies Donic’s FD3 3rd-generation technology. Originally released to face a world without speed glue due to ITTF regulations, this high-performance technology has made it possible for players to not only play at higher speeds than ever before but also ensure a dependable level of spin.

Donic Bluefire m2 rubber has an in-built catapult effect that enables players to significantly ramp up their speed. With the advantage of this increased speed and the confidence it brings, players can step back from the table with more confidence and employ looping rallies or smashing tactics against their opponents for great success.

Seems quite fast, right? However, I can say it’s sufficient for normal players like us without any doubt. But for those top players or speed seekers like Ma Long or Ovtcharov, the speed can’t satisfy their needs. Is it fast? Yes. Is it super fast? Not really. So that’s why we can’t see those really good players using it in international games. Donic Bluefire m2 is an impressive table tennis rubber designed for high-level performance. Its most notable feature is its spin, with a medium-high throw angle and pronounced arc, which makes the ball soar over the net safely, ensuring that even powerful shots have a greater spin and chance of success.

Paired with its exceptionally spinny loops and serves, players will find themselves achieving exceptional accuracy. What’s more, Bluefire M2 is a medium-hard rubber and can generate spin with ease. Perhaps the biggest advantage of this rubber is its spin.

Bluefire is designed to offer reinforced control, allowing players of all levels greater precision in their shots. Even beginners can benefit from its stability and enhanced accuracy.

As we mentioned, this is a medium hard, or we better say relatively soft rubber. Not like Hurricane National Version or T05, being softer means that players can have more control of the location, speed, or spin over the ball.

When I was doing the test, I find that M2 has great performance when I push the ball or do some drop shots. Also when I tried to block the ball, the rubber is not so bouncier and helps me to defend the powerful topspin with the proper location. Donic Bluefire M2 is a great weapon for loopers and loop openers. This is due to the potent spin M2 offers, delivering a powerful impact on each shot that leaves your opponents gasping for air. The average weight of the rubber makes it easy for you to return to position quickly.

This also allows you to play close enough to the table that you can fully unleash its in-built catapult effect, allowing for shots with remarkable speed. I can feel that initiating the topspin or in topspin rallies, the rubber is able to provide sufficient support no matter if I play near the table or far away from the table.

Especially when I loop from back court, the rubber makes it easier to loop the ball with a higher arc and stronger topspin. The feeling is quite similar to Butterfly Tenergy 64 or 80. As a spinny rubber, Bluefire M2 has great performance in generating spin, no matter in serves or pushes. As a chopper, the first thing to test this rubber is to use it to chop. Sounds interesting, right? But surprisingly, I find Bluefire M2 can also be used for chopping as the soft top sheet makes it easier to control the ball and generate super strong spinny balls. Sometimes my teammate can only push it back.

Also, we use this rubber for some serves like backspin or sidespin. There is no huge difference with other rubbers as serving mainly depends on the technique. But we find the black and red version of the rubber has slight differences. The black version seems to have a stronger spin and it’s a little bit more suitable for serves or pushes, especially when we use it as backhand.

Finally, I want to say M2 is also ideal for players who tend to initiate the backspin ball first. For players with an offensive playstyle, looking for opportunities and initiating with loops or flicks first is their main goal during the match. Bluefire M2 can help players loop the ball with decent spin and speed easily.

Donic is a well-respected brand throughout the table tennis world, thanks to its renowned German craftsmanship. Since its inception in Cologne by Doctor George Nicklas, Donic has made valuable contributions toward helping players create success on the court. It has been under the ownership of the Schreiner family since the late 1980s when Dr. Nicklas relocated to Sweden. It continues to make strides in providing premium ping pong rubbers, rackets, tables, shoes, etc that help athletes reach their goals and perform at their best during competition.

Thus, Donic is an integral part of the table tennis culture around the world, and its slogan “Create Success” captures this spirit of excellence perfectly.

The Donic Bluefire M series is specially designed for players who need to hit high spin shots consistently. With a harder top sheet, it allows for maximum spin on each shot and increased durability. There are actually 4 rubbers in the Bluefire M series that are Donic Bluefire M1 Turbo, M1, M2, and M3. The only difference among these Bluefire M series rubbers is the hardness of the sponge. M1 Turbo has the hardest sponge and M3 is the softest one. We can easily observe from the following table.

Obviously, the hardness of Bluefire M2 is between Bluefire M1 and Bluefire M3, which means that it provides players with a proper choice for both controls, spin, and speed. It is softer than M1 but has a stronger spin. Personally speaking, I prefer to use a harder rubber for my forehand in order to do powerful loops and use a relatively softer rubber for my backhand.

Thus, Bluefire M2 is perfect for both forehand and backhand. That’s why it becomes greatly popular among players.

Players tend to compare the Donic Bluefire series and the Butterfly Tenergy series as they are both classical products. Tenegy series is widely used in the time of speed glue. Almost all the players use this series at that time. However, after the reform of ITTF, Bluefire becomes more and more popular. So what is the difference between them? Which one is better? First, we have to look at those top players in the international field, obviously, there are more players using the Tenegy series. As we have mentioned before, only players with a ranking like 200+ or 300+ use the Bluefire series as the main cons of it is its speed.

Some people say that Bluefire M2 is an alternative to energy 05 but I don’t think so. T05 is much harder and the speed is not comparable with other rubbers. The margin of the spin between these rubbers is also subtle. We can’t say Bluefire M2 generates more spinny balls than T05.

But to some degree, Bluefire M2 can serve as an alternative to tenergy 64 or tenergy 80. Both these rubbers are relatively soft. If you find the price of tenergy is not affordable, then I suggest that you try the Bluefire series or Tibhar Evolution FX-P. They are quite similar. But T05 is another thing, obviously.

The Donic Bluefire M2 is a top choice for offensive players. It delivers an impressive balance of speed and spin, allowing attackers to reliably hit with a heavy spin on their shots.

Players who prefer more aggressive styles, especially those whose game is based on strong spinny openers off service or devastating topspin, will appreciate the level of control and spin they can get from this rubber. It can be used for both forehand and backhand.

However, it cannot be listed as the top rubbers as it lacks enough speed compared with other rubbers like tenergy 05. But this is only for really top players. For most players in the world, Bluefire M2 is absolutely a great choice and it is worth giving a shot.