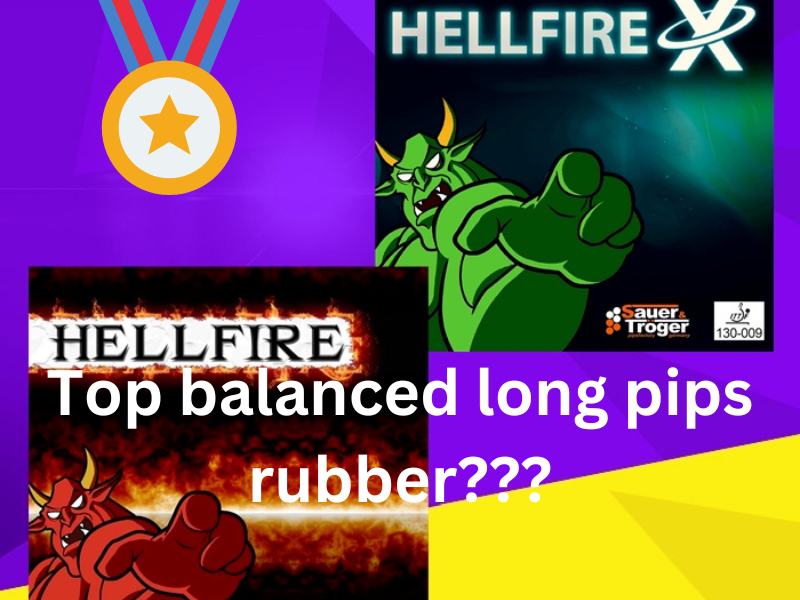 As an exceptional long pip, this rubber has undergone extensive trials, which lasted over three years in total, to create a high-quality product that would meet the demands of experienced players. The Hellfire X was developed under the guidance of Sebastian Sauer and some of the world’s top players in long pimples, resulting in an outstanding long nub with exceptional features.

spin reversal, speed, and control have always been important indicators to measure the performance of long pips rubbers. However, these three elements are also contradictory to each other.

Long pimple rubbers with great spin reversal will have poor control, naturally. And on the contrary, rubber with good control has less spin reversal. And the speed is also closely related to spin reversal and control. After the reform of regulation of ITTF on the long pips, how to achieve the balance of these three elements is the headache problem for all the long pips rubbers.

So far the long pips rubber with the most perfect combination of these 3 aspects is Sauer & Troger’s Hellfire X.

However, the biggest con of this rubber is its slow speed. Although the defense is stable, the spin reversal and offensive performance are gradually inadequate after the plastic ball reform launched by ITTF.

Therefore, after several years of research and development, the company finally launched this Hellfire X in 2020, which serves as the enhanced version of the original Hellfire to better deal with the plastic ball in the new era.

After the test, we were quite amazed by its great performance. So is this a great rubber? Let’s have a look.

The pimples are arranged horizontally, with a height of about 1.7mm and a width-to-height ratio close to 1.1. The rubber has a high aspect ratio and the pimples are far apart. The space among the pips is larger than the normal ones.

Theoretically, this type of long pips rubber will have a rather strange surface texture, so the friction at the head of the particles is good. Also, the heads of long pimples are slightly roughened. But the side of the pimples is designed with low friction and is quite smooth (Similar to another long pips rubber Dr. Neubauer Trouble Maker), so in theory, the passive block of the ball can generate great spin reversal. Sauer & Troger Hellfire X has a super great performance in spin reversal, this is the most impressive feeling on the first try of this rubber. When we were in the test(I used the OX version), as long as I blocked the topspin ball back, it would be super complicated for my teammate. Only Dawei 338D series long pips have such similar spin reversal performance among all the long pips rubbers that I have used.

Besides, the rubber has good performance at anti-spin as well. Like all the long pips, it’s easier for us to return the serves and do chop blocks near the table. The ball becomes unpredictable and has quite a low arc after hitting the table of opponents.

So it’s almost impossible for the opponents to do constant loops, especially when I begin to chop at a far distance from the table. Spin reversal is the biggest feature and advantage of this rubber.

Sauer & Troger Hellfire X could provide great control in the game and it is especially reliable when in defense. As we mentioned previously, this rubber has a high aspect ratio and the heads of the pimples are a little bit roughened.

Even when hitting a fast attack stroked from the opponent, the pimples on the surface of the rubbers could absorb the incoming power and slow down the speed, forcing opponents to pass them with a light scoop stroke.

But when I was on the test, the ball failed to pass the net during the first several defensive strokes. We have to adjust the angle of the racket a little more open to hit or block the ball. When chopping the ball from back court, the arc is really low and the ball is super spinny.

When the ball was hit correctly, it will fall down greatly and cause lots of problems for the opponents. 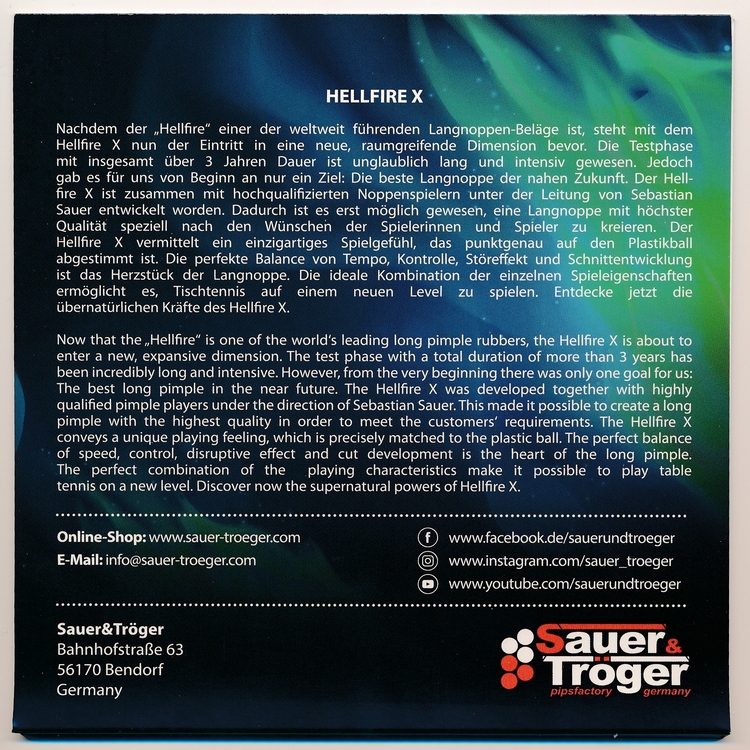 But according to my experience, when we use long pips to attack, we better open the racker with a larger angle and hit the ball rapidly when the racket begins to contact the ball. This rubber cannot be compared with Dawei 338d-2 in aspects of attacking but it’s more well round.

What we desire when attacking with long pips rubbers is totally different from the expectation of an inverted rubber. The ball doesn’t need to be super spinny or have huge speed, but should be unpredictable. It includes the change of the spin, the location, and loads of things. Sauer & Troger Hellfire X is revolutionizing the table tennis rubber market with its great performance. Thanks to its special sponge material, this rubber offers a combination of speed and spin that gives gamers an edge against their opponents.

Its long pimpled design also adds extreme unpredictability when it comes to serves and returns, making it difficult for opponents to return or defend against shots. Players also benefit from its all-around control, allowing them to make precise and powerful attacks at will.

Players can have a wide range for the match of this rubber with a blade. Some defensive blades like Diode V blade, Barricade, Chen Weixing, and Unicorn are the common choice of long pips players. But they can also match it with a relatively offensive blade like Butterfly Maze Advanze or Stiga Clipper. Thus players can have more benefits from this rubber.