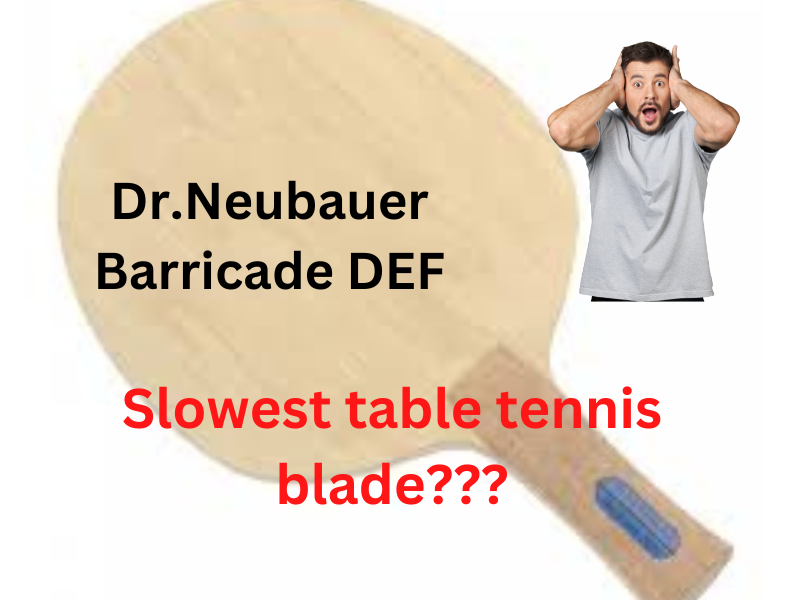 In our previous blogs, we talked a lot about long pips and short pips rubbers. However, some players who have a defensive playstyle are curious about which blade is proper for defending. So today we are going to talk about Dr. Neubauer Barricade DEF.

Actually, as a chopper with long pips, I have been using Clipper for over 8 years. Last month, it occurred to me that I may try this new defensive blade Barricade DEF with long pimple rubber. Thus, I purchased it and did an in-depth test. Today, I could share my feeling with you about this marvelous blade.

At the first sight of Barricade DEF, the very first impression of it is that oh my god! This is a really large blade. The diameter of this blade is about 18 cm with a surface of 164mm x 163mm and it’s obviously much larger than a normal blade. However, the weight is quite amazing because it’s super light! The weight is only 52 grams and we have to know a normal table tennis blade weight ranges from 80 to over 100 grams.

It enables players to reset their playing position easier and faster than ever before – especially when the action gets quick and intense. Players can react quicker in defense due to the light weight of the blade, as well as blocking and chopping. The blade has a 7-ply construction, which is ideal for modern defensive players as it can absorb incoming power easily. I personally don’t like using a 5-ply to chop or block as it might be bouncy.

Dr.Neubauer Barricade DEF features super slow speed, which might make loads of players difficult to be used to at first. When I first used this blade, I have to hit the ball with more force to let it pass the net. So what is the meaning of slow speed for a defensive ping pong blade? Especially we are in an era where almost all the players seek for the fasted speed no matter for their blades or rubbers.

Its slow speed provides excellent spin reversal to help achieve maximum control of the table when matching with long pips rubbers. Whether you take a defensive or control playstyle, it can help you make the ball unpredictable.

As we all know, long pips or short pips will not generate spin and they only can do the spin reversal. So the more time that the ball stays on the rubber or the racket, the more spinny the ball will be. That’s why we defensive players sometimes want a slow blade so that we can have more time to generate more spin.

However, some players also use forehand to do some loops. In this case, the speed is definitely not as fast as those offensive blades. It is recommended to match with harder rubbers to attack such as Tenergy 05 or DHS Hurricane NEO 3 to compensate for the soft blade. BARRICADE DEF is a great choice for players who are looking to defend away from the table. This blade combines the seemingly contradictory elements of safety and danger through its relatively slow speed, making it ideal for chopping. It is especially popular with players who use long pimples in order to maximize spin reversal.

During the training, I use this blade with Dawei 338d-1 OX and it’s much more difficult for my teammate to do constant loops. They even lack sufficient confidence to loop the second stroke and choose to push the ball back, which has a super strong backspin. They all told me that this blade makes them feel more complicated than my Clipper before.

But as mentioned, players have to chop or hit the ball with more force because the blade is quite slow. If you play it with the same force as using an offensive blade, then probably the ball couldn’t pass the net. Whether you’re using long pimples, reversed rubbers, or short pimples, Barricade DEF offers unbeatable control and effectiveness. With this rubber, you can reach a maximum spin reversal with long pimples, high rotation when chopping with short pimples, and an amazing attack by looping or hitting to keep your opponents guessing.

Actually, not all the long pips players like to play far away from the table. Some players also like to block near the table. In fact, Barricade DEF is a quite soft blade and it is much easier to control the ball when we do some blocking. The correct time to hit the ball is essential when we use long pips or short pips to block the ball, especially when the incoming ball is quite spinny.

Barricade DEF is the slowest blade that I have used and it’s tremendous for us defensive players due to its superb control. Even when we sometimes do drop shots, the blade allows us to locate the ball precisely in the place that we desire. As we have mentioned, this blade has marvelous performance with long pimples or short pimples no matter whether we play near or far away from the table. However, we have to consider that sometimes we need to block the ball with inverted rubbers as well.

At first, I thought that Barricade DEF can only do passive block due to its slow speed. But amazingly, the blade has great performance in the active block as well. And the overall defense is much more stable than my previous Clipper. As long as I control the angle and the distance well, the ball can be blocked back stable, even with some super violent or powerful topspin.

Players who want to place a long pips rubber on this blade can choose a rubber with a sponge or without a sponge.  If you have never tried OX, then with Barricade DEF you could give it a shot. The ball would become more unpredictable and can confuse the opponents greatly.

In the case of short pips rubber, players can choose one such as Victas VO>101, Friendship/729 802, Butterfly Impartial XB etc. The basic idea is the same with long pips rubber. Similarly, you could make a reference by clicking the link below to read our previous blog:

There are many choices when we choose an inverted rubber for Barricade DEF. If players tend to loop a lot or play lots of topspins, then better for them to choose a harder one. Butterfly tenergy 05, DHS Hurricane NEO 3, Donic Bluefire M2 are all good choices.

However, if players pursue a control playstyle or even chop with forehand, like me, they could choose a medium-hard or even a soft rubber such as Yasaka Mark V, Butterfly Rozena, Yinhe Mercury, etc.

Who is Dr. Neubauer Barricade DEF for

Obviously, Dr. Neubauer Barricade DEF is absolutely not suitable for offensive players. It would be an ideal asset for defensive players, especially those who use long pips and chop far away from the table. The great control of this blade can help players improve their performance in their games. Dr. NEUBAUER’s Barricade DEF blade is a great choice for those looking to master their defensive skills. Its unique design provides players with the ability to chop far away from the table while also allowing them to have complete control when they come close to the table.

Its powerful, slow speed and incredibly precise control make it an excellent choice for defensive and long pips players. I would personally suggest that those who use long pips can have a try for this amazing blade.