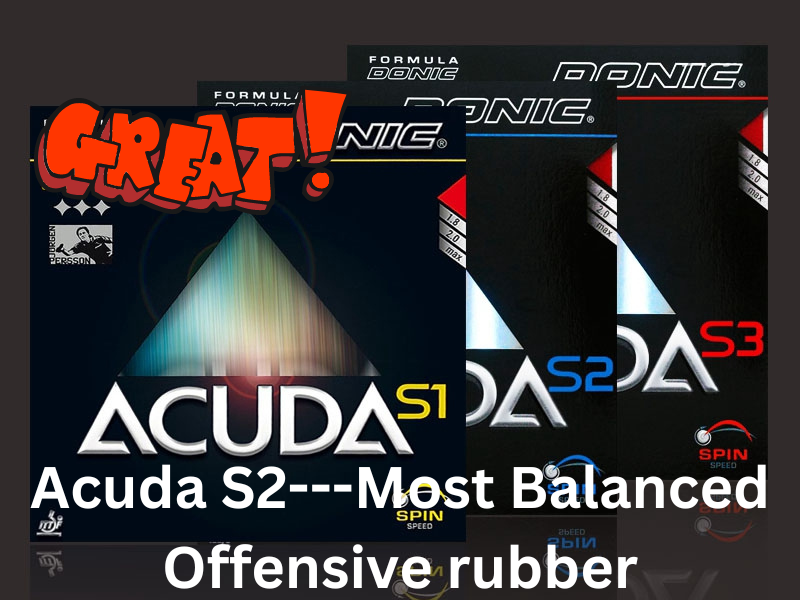 Donic Acuda S2 is the perfect choice for serious table tennis players looking to gain an edge. This rubber is specially tuned for spin-focused, high-precision strokes, and its built-in speed gives aggressive players that extra burst of power to outmaneuver their opponents.

Its super tacky surface offers superior control and ball grip during fast loops and smashes, making it excellent for spinning plays while remaining fast enough to dominate the court. So in this blog, we shall have a close look at the performance of this classic rubber.

The first generation of Acuda was released in 2010, and it has always been one of my personal favorite rubbers then. It was at the early stage of the German cake sponge, and many details were not very well done. There were considerable differences in the same product such as weight or hardness. But through years of development, now it becomes much better.

It could be noticed that, like Donic Bluefire series, FORMULA DONIC FD3 (3rd Generation) has been applied to Donic Acuda series as well.

An impressive number of new rubbers have been developed since the replacement of the speed glue in 2008. According to Donic, FORMULA DONIC FD3 combines excellent speed capabilities with both powerful spin and feel as well as a capacity for great accuracy. It can perfectly recompensate for the absence of speed glue.

Donic Acuda S2 is a medium-soft rubber and has a special sound when hitting the ball.

Donic Acuda S2 has excellent speed when hitting the ball which gives players an advantage. Players can do constant loops and the feeling really brings us to the days of speed glue. Other rubbers like Hurricane or Tenegy can’t provide such a feeling, despite that their absolute speed is much faster.

According to my experience, Tenergy 05 or Hurricane 3 has a 20% to 30% faster speed but sometimes it’s hard to control the ball as the rubbers are too hard. It requires huge amounts of training time. So for those non-professional players, Acuda S2 is a better choice to achieve the balance between fast speed and decent control.

The ball has a great arc with lower speed under small force but is quite spinny, which is the advantage of this soft rubber. Under great force, players can do powerful loops and there are nice sounds, as we mentioned before. 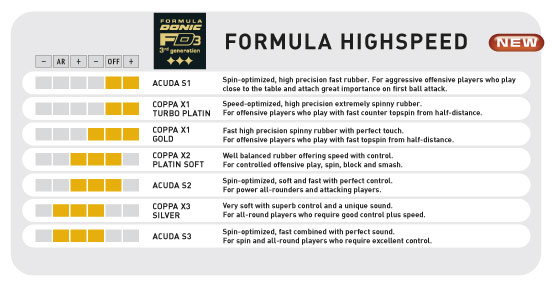 It is widely acknowledged that Donic Acuda S2 features great spin and perhaps this is the biggest advantage of this rubber. Since the sponge is medium soft, it can grab the ball perfectly and generate more spin.

Acuda S2 is absolutely an ideal choice for loopers. Players can do powerful loops or counter loops no matter near or far away from the table. It can be used for both forehand and backhand.

Besides, when pushing or chopping the ball, Acuda S2 also has great performance. I used to chop with Acuda S2 on the forehand. The soft sponge can absorb the incoming power and generate super strong spin.

Without any doubt, Acuda S2 has the best control performance among the Acuda series. After 1 week’s intensive training, this rubber has been totally “explored”.(It normally takes 1 or 2 weeks for table tennis players to be used to the new rubbers or blades)

Amazingly, we have found that Acuda S2 perhaps is the most balanced offensive rubber currently in the market. The ball lands at the desired place no matter with a drive, loop, push or drop shot. The rubber is quite tacky at first so the control is quite great within the first several months. But players should always clean the rubber well to keep it tacky and its control as well. 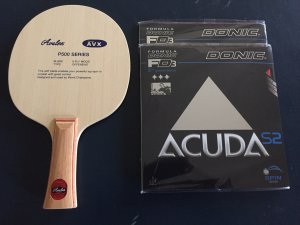 As a medium soft rubber, Acuda S2 can be used for both active blocks and passive blocks. However, the rubber has a relatively low throw angle so sometimes players have to adjust to get the ball over the net, especially during the passive blocks.

Acuda S2 has really nice feeling and performance in topspin rallies. With more friction, the ball will have more spin and it’s much easier to do counter loops. But similarly, due to its low throw, players have to loop the ball much higher, especially at a far distance from the table.

It would be perfect for forehand topspin or drive. The flash hits are also great when the ball doesn’t contain too much spin. However, when it comes to the backhand, I find it more difficult to do constant loops with this rubber due to the same problem, low throw angel. So if you use it as backhand, probably you have to loop more forward and adjust the angle a little bit higher. 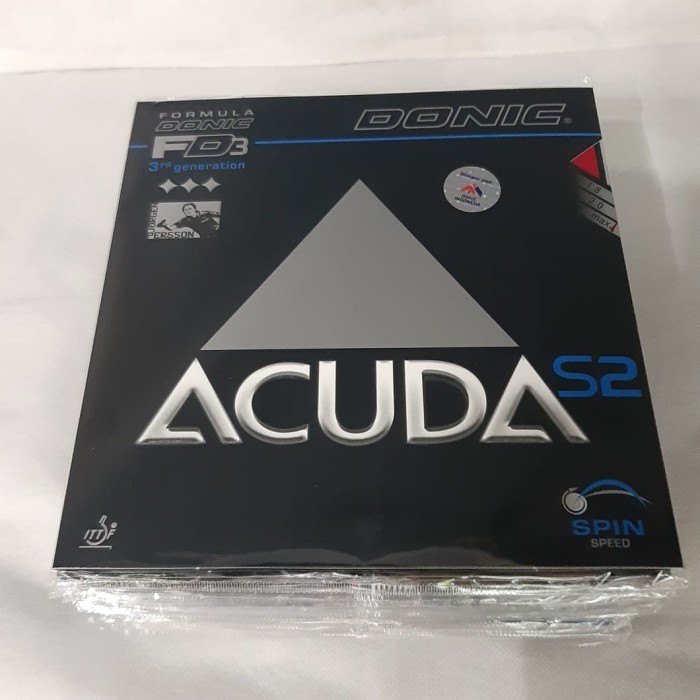 To be honest, Acuda S2 is great at lifting backspin. You will find that the ball can be lifted up even with a small force, but the ball contains super spin. The ball’s initial speed will not be that fast but it’s more difficult for your opponents to block back or do counter topspin. 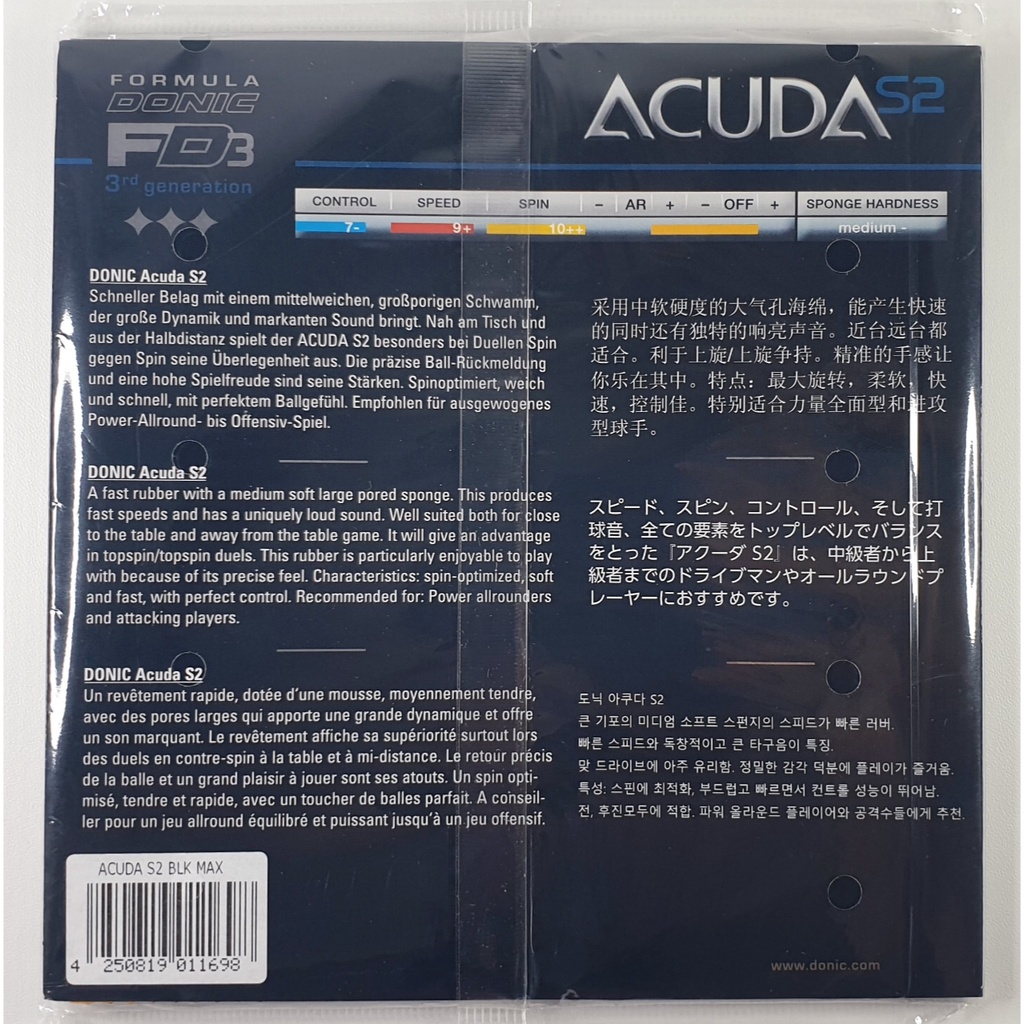 Who is Donic Acuda S2 for

Donic Acuda S2 Table Tennis rubber is an ideal choice for both offensive and well-round attacking players. Its high-tack tensioned surface generates a maximum spin potential with each stroke, and its consistent release of energy ensures optimal speed and power.

Furthermore, the soft sponge layer allows for total control over shots, enabling players to accurately direct their efforts where desired. Experienced players looking for a balance between power and accuracy would benefit greatly from the Donic Acuda S2’s unique combination of components, allowing them to dominate their opponents in both defensive and offensive positions.

For those players who seek a controllable playstyle, then it’s better to match it with an all-wood blade like Maze Advance, or some relatively soft blades such as JOOLA Vyzaryz Trinity, Butterfly Revoldia CNF, etc.

DONIC is one of the world’s leading manufacturers of table tennis equipment, renowned for its quality and innovation. Established in 1925 in Germany, the company has since become a leader in technology and material development, offering players around the globe some of the best products available on the market.

By using the latest production technologies, materials, and research methods, DONIC has positioned itself as an industry leader in professional play, amateur play, and training tools. Their rigorous testing process ensures that their equipment withstands during even the most demanding tournaments and games.

People are keen on comparing Donic with Butterfly as they stand for Asian and European table tennis equipment development respectively. Actually, both these two companies have launched quite classic rubbers and blades these years, which we have mentioned in our previous blog.

Donic Acuda S2 is the perfect rubber for the aggressive player who likes to attack from close to the table or at a far distance as well. Its medium-hard sponge provides the perfect balance of speed and control, allowing players to differentiate between spin-focused shots and all-out power drives.

This rubber is a great alternative for Tenergy 05. Sometimes the best rubber such as T05, D05, and Hurricane is not suitable for everyone. They are only the best for top players. Under such circumstances, we could give Donic Acuda S2 a shot, and very probably, it may bring a great surprise to you.