A few years ago, Zhang Jike won the Grand Slam, thus he has become super topical and influential both in China and the world. Butterfly took this opportunity to launch the Zhang Jike series, such as Zhang Jike super ZLC, ZLC, ALC, and other high-end blades.

As one of the most aggressive ones, Zhang Jike Super ZLC represents the ultimate technology as well as R&D of Butterfly Company. In general, Zhang Jike super ZLC is a high-performance and near-perfect offensive blade, but its price is also extremely high.

As the most expensive high-end blade, its price on Amazon is almost $400. So is such a costly blade still worth buying? What is the difference between Super ZLC and ZLC?

Zhang Jike is a Chinese table tennis player who has been ranked as the world’s number one player. He has won four World Championships, including the singles title in 2011 and 2013. Zhang is also a two-time Olympic champion, having won gold medals in the team event and the singles event at the 2012 London Olympics.

Zhang was born in Tianjin, China, in 1988. His parents were both table tennis players, and he began playing the sport at a young age. Zhang quickly developed into a talented player, and by the age of 18 he had already won his first World Championship title.

Since then, Zhang has gone on to enjoy a hugely successful career, winning numerous titles and becoming one of the most successful table tennis players of all time. Until now, Butterfly Company has launched a total of 4 Super ZLC blades, namely Mizutani Jun Super ZLC, Lin Yun-Ju Super ZLC, Harimoto Innerforce Super ZLC, and Zhang Jike ZLC. Interestingly, Zhang Jike himself does not use the blade named after him, he has used the Butterfly Viscaria for most of his career.

The main difference between ordinary ZLC and Super ZLC is the machining of the blades. Super ZLC blades feature stronger ZL fibers and carbon links, making them have a larger sweet spot and nearly twice as dense as regular ZLC blades.

According to the official promotion, the new processing tech provides a stronger link between the carbon and ZL fiber, generating fast and controlled balls with fantastic spin.

The appearance of regular ZLC is relatively calm, just like the Audi RS series sports car, which is low-key and restrained. On the contrary, Zhang Jike Super ZLC has a glittering gold outlook. What catches the eye is the overall luxurious, and gorgeous appearance. The blade is more like the Audi R8 sports car.

Zhang Jike Super ZLC enjoys a larger sweet spot, which means that the sweet spot of the best hitting point covers almost the entire board. That is to say, the whole blade seems to be the best hitting position, which is more friendly to beginners and intermediate players.

It can be seen that the Super ZLC exceeds the ZLC in terms of both weight and thickness. In fact, this is due to the different carbon fiber structures of the two blades.

Super ZLC has a higher-strength fiber-carbon blend. It can be seen that the Zhang Jike Super ZLC’s fibers on the right are more slender and compact. In addition, in terms of the elasticity test, the height of the free fall of the table tennis ball is 35 cm for Zhang Jike ZLC, and 36 cm for Super ZLC.

Zhang Jike Super ZLC: The strokes are usually quite fast with strong rotation and very low arc. The most important thing is that there is no deceleration after crossing the net, so it’s extremely difficult for opponents to judge or return it back. In many cases, you can even kill the game with only one stroke.

Besides, if you like to hit the ball in high-pace exchanges at a close or middle distance from the table, like Zhang Jike himself, then this blade is absolutely a great choice for you. But it requires good control, so it is suitable for advanced players.

Zhang Jike ZLC: The arc is higher and players can generate spin in a relatively comfortable way. But the initial speed is not as fast as Zhang Jike Super ZLC. Normally the second jump will be a little faster and the deformation will be larger. Due to the larger sweet spot, there is also great dwell time that enables players to wrap and rotate the ball well. The loops of Super ZLC are much faster and more rushing than ordinary ZLC. And the overall arc is really flat, even after jumping onto the opposite side, the ball rushes forward, making the players completely suppress the opponent in the middle court.

On the other hand, the toughness of ordinary ZLC is much better and its deformation ability is quite decent. So the arcs are much more beautiful. It is suggested that players should combine loops and flash hits in the middle court when using Zhang Jike Super ZLC and the angle of the blade should be more upright.

While using ordinary ZLC, the blade should be pressed down, that is to say, hit the ball with a smaller angle and more friction. There is a slight difference between the two blades so we have to adjust according to the distinct situation.

Zhang Jike Super  ZLC: The blade performs excellently in drop-shots or pushes. It has a quite clear feel and can place the ball on the desired point.

Also, it’s quite easy to adjust the speed with proper strength. As the blade is much harder and more bouncy, the ball can be bounced quickly to the opponent’s uncomfortable area. So Super ZLC is able to hit the ball with super fast speed while maintaining high-level control.

Zhang Jike ZLC: The spin can be offset in some drop-shots but the overall experience of control is not as good as Super ZLC. But the ordinary ZLC is relatively softer and less bouncy, so in some long pushes, it has decent performance. 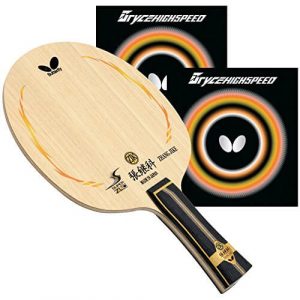 The defense of both two blades is quite decent. The only difference is that Super ZLC can be more offensive when defending, as the ball can be blocked back with faster speed. The feeling is just like the outer carbon version of Harimoto ALC.

The defense of Zhang Jike ZLC is relatively stable. It’s not as aggressive as Zhang Jike Super ZLC, but it fully reflects the characteristics of ZL Carbon, which is both soft and bouncy. If you prefer to kill your opponent by constant heavy loops, then Super ZLCis very suitable for you. High-elasticity hybrid intersecting fibers make it full of energy. It has high rebound speed and powerful forehand drive loops, especially at a close to mid-distance from the table.

Ordinary ZLC is more suitable for stable style players whose forehand strength is not very sufficient, Compared with Super ZLC, ordinary ZLC is much lighter and is quite balanced in every aspect. Thus, if you are not so crazy at forehand or backhand heavy loops, then ZLC is a better choice for you.

Generally Speaking, Zhang Jike Super ZLC is a high-quality table tennis blade made by Butterfly. It’s constructed with a combination of Zhang Jike’s favorite woods – Limba and Ayous – which gives it an exceptional feel and great power. The low-throw geometry of the blade provides excellent control, making it ideal for players who like to keep their shots close to the table.

However, this blade is not friendly to beginners not only because of its super high price but also because players may overly rely on its larger sweet spot but ignore improving their basic skills.

It’s more suitable for advanced players who play at a middle or short distance from the table. Lastly, it indeed has great quality but the price may not be worthy for everyone. It only works when it fits your playstyle well and you have enough budget. Under such circumstances, Zhang Jike Super ZLC is a great option.