On the basis of TeXtreme, TeXtreme+ further improves the strength and stability of carbon fiber. Its biggest feature is that compared with other carbon fibers, hitting the ball with the edge area of ​fiber carbon using TeXtreme+ is still as stable and powerful as the center sweet spot, and it will not affect the overall balance and weight.

In terms of style, Carbon Dynasty is more suitable for players with big motions and who prefer heavy loops. This blade will enable you to play the same magic ball as Xu Xin!

Xu Xin is a Chinese table tennis player who is known for his aggressive playstyle. He is one of the most successful players in the world, with multiple World Championship and Olympic titles to his name.

Xu Xin is renowned for his quick reflexes and powerful attacking strokes. He often forces his opponents to play on the defensive, using a combination of spin and speed to keep them off balance. H

is aggressive play has earned him the nickname “The Demon” from his fans. Xu Xin is also known for his entertaining play style. He often celebrates points with acrobatic moves. His unique playstyle has helped him to become one of the most successful table tennis players in the world. Stiga is a Swedish company that specializes in the production of table tennis equipment. Founded in 1944, the company has been a leading force in the sport for over 70 years. Today, Stiga offers a wide range of products, from tables and nets to paddles and balls.

It also produces a line of table tennis robots, which are perfect for practicing your skills or getting a competitive edge. Whether you’re looking for recreational or professional-grade table tennis equipment, Stiga is sure to have what you need.

In terms of thickness, Stiga Xu Xin edition is 5.88mm, while the ordinary Dynasty Carbon is 5.90mm, it can be seen that Stiga Xu Xin Edtion is heavier but relatively thinner.

The two are not very different in appearance, both are in dark colors, but the Xu Xin edition will have the signature of Xu Xin, which seems to be cooler. Stiga Dynasty Carbon: You can feel the ball rushing forward obviously when hitting the ball under great force. The overall feeling is great, whereas the ball is not so fast but more stable.

So when lifting the backspin ball or during the topspin rally in the middle court the speed is just so so, and it seems that it cannot cause more threats to opponents.

Stiga Dynasty Carbon Xu Xin Edition: Stiga Xu Xin Edition has an obvious different performance in this aspect. It has a super-fast initial speed, and he can quickly loop the ball out of the first stroke. The feeling when hitting the ball is quite similar to that of Stiga Ebenholz NCT VII.

However, when players retreat to the middle court, it has the same performance as DHS Long V that and counter loop back the ball consistently.

Stiga Dynasty Carbon: The ability to generate spin is quite decent before trying Stiga Xu Xin Edition. It has quite a soft and stable feeling, especially like the feeling of Butterfly Jun Mizutani ZLC. It can generate long and low arc when looping in the middle court. But it is not suitable to hit the ball flashy without effect.

Stiga Dynasty Carbon Xu Xin Edition: Players can feel the huge difference between those two blades quickly. The blade has a clear feeling when looping or driving and at the same time, it is full of toughness under great force.

It can be felt that the blade has abundant power and can wrap the ball well to generate huge amounts of spin. Stability + violence is what I feel when I play at a mid-to-far distance from the table. It performs quite better than ordinary Stiga Dynasty Carbon in this aspect.

As penhold blades, these two are quite very heavy at the head of the blade, Stiga Xu Xin Edition is even much heavier. Thus, they are not suitable for quick conversion of forehand and backhand. In this regard, it is also not friendly for players who lack enough strength in their hands.

If you have enough strength to control the blade well and pop the ball out quickly, then it´s a great choice for you. But for some girls who prefer to do quick flash hits in the middle court, then they may struggle to control the ball as it can be clearly felt that the center of gravity is on the head of the blade. They have almost the same feeling in this aspect. If you wanna opportunities through drop shots then Dynasty Carbon is better. If you are looking for an active attack in control, then Stiga Xu Xin is more suitable. Since the blade is a bit heavy, the flexibility of the wrist and fingers will be affected to a certain extent.

Stiga Dynasty Carbon: The blade does a good job in absorbing small forces, but the stability under strong force is not particularly good. The board is a little shaking and players find it difficult to place the ball as they expect

Stiga Dynasty Carbon Xu Xin Edition: Stiga Xu Xin Edition gives a very stable feeling in blocking. it is not particularly obvious under small force. However, under great force, the blade absorbs power very well and it feels as if it´s just like a wall and can block back the incoming loops easily. Stiga Xu Xin is suitable for players who like loops in the mid-to-far distance from the table under great force. But it also has a good performance under small power. There is no obvious weakness in control, defense, and attack. The ordinary Dynasty Carbon is a little worse than Stiga Xu Xin Edtion in every aspect.

But overall speaking, it is quite a balanced blade too. Both these two blades are suitable for beginners and advanced players, especially those who play with penhold grips. 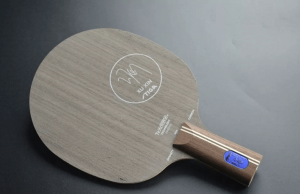 These two blades are relatively heavy, the conversion of the forehand and backhand in the middle court is not particularly good, so it is suitable for loop rallies in the backcourt. Stiga Xu Xin Edition is especially stable and violent.

The blade, excellent in every detail and well-balanced, contains steady energy and the defensive performance is also quite amazing! It can be seen that Stiga has put a lot of thought into launching this classic masterpiece this time. So it’s really worth trying.