When it comes to the best chopper in the world, who comes to first to your mind? Without a doubt, it has to be Joo Sae Hyuk, and this is an accepted fact in table tennis community.

Although the attacking style with two-sided inverted rubber is still the norm, there are still many choppers out there. So for those choppers they will be very curious to know what kind of blade and rubber Joo uses? Is this also proper for them?

Korean table tennis player Joo Sae Hyuk is one of the most successful choppers in the world. He has won three Olympic medals, four World Championships, and six Asian Championships. Joo Sae Hyuk first picked up a table tennis bat when he was just four years old, and he quickly developed a passion for the sport.

By age six, he was already competing in tournaments. When he was thirteen, he won his first international title at the Junior World Championships. Since then, Joo Sae Hyuk has gone on to achieve great things in the world of table tennis.

His magical playstyle and stable chopping made him gain great popularity all over the world. He is widely considered one of the greatest choppers of all time, and his accomplishments continue to inspire young athletes around the world. I suppose many people have never heard of this brand before. Honestly speaking, it’s the same for me as this is a newly-established brand. Nexy is a company that produces table tennis equipment. The company was founded in 2006 by two table tennis players, Korean-born Nexy Kim and American-born J.D. Watkins.

Nexy specializes in the production of high-quality table tennis blades and rubbers. In addition, the company offers a wide range of table tennis accessories, including nets, posts, and bags.

Nexy products are used by some of the world’s leading table tennis players, including multiple Olympic medalists and world champions. The company has its headquarters in Seoul, South Korea, and also has a U.S. office in New Jersey.

As we all know, in the early years, Joo’s blade was customized by Butterfly Company for him. However, after Joo first retired due to a serious illness, Butterfly ended their cooperation with him.

Although many fans consider the previous Joo blade from Butterfly to be a particularly classic chopping blade, unfortunately, this paddle is now no longer in production.

Joo then made his comeback at the age of 38 after a year of adjustment, Joo returned and this time, he brought us a new blade designed and manufactured by Nexy Company. Previously, Joo himself had been using the Butterfly-Joo and had participated in major tournaments.

But this time he has developed his weapon with advanced technology and it’s quite different from the previous one. Why did Joo choose a 7-ply pure wood blade instead of 5-ply pure wood in the last years of his career? What is the performance of this blade? Let’s take a look. The speed of the Nexy Joo is significantly faster when it comes to bouncing and attacking the ball on the short court. Especially during the counter-attack, the speed of the ball is faster than Butterfly-Joo and the lethality is stronger.

When in the middle and back court, the Nexy Joo can also play great loops and drives, while the Butterfly Joo is not so sharp offensive. Sometimes the arc is more beautiful and elegant that you can imagine the arc like Xu Xin‘s. 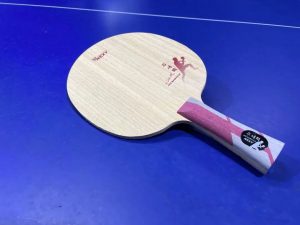 Butterfly Joo is much better at holding the ball, and it is more solid when chopping. The opponent’s offensive stroke can be absorbed by the blade and produce better deformation, so it is easier to chop the ball and generate more spin.

While Nexy Joo is a little less effective in this respect, the 7-ply pure wood is not as effective when chopping. The curve of the ball is lower and flatter than the Butterfly Joo.

In the middle or back court, the Butterfly Joo has a better hold on the ball and is better able to hit excellent sidespin balls.

It is important to note that the rubbers used by chippers are usually soft so that they are not very threatening when driving forward. Thus, they tend to use sidespin to increase their intimidation.

We can see this when we watch Joo’s matches, often when he is chopping or looping the ball back, the curve of the ball is very abstract. The ball usually has greater arc and can be quite threatening as the opponents are easily like to miss the ball.

Chipper players often retreat to the middle or back court to defend and then wait for an opportunity to counterattack. This is why it is important for the choppers to have a blade with great top power. Butterfly and NEXY both perform greatly.

However, Nexy Joo is much faster and can be used in the attack when those choppers are about to loop drive. Nexy Joo, to some degree, is similar with Joola X7 and Stiga CLCR, and always generates lower arc and faster speed. When it comes to controlling, Butterfly Joo is the best undoubtedly as it has precise placement and a high fault tolerance rate. So players dare to chop with greater movement, while Nexy Joo is slightly inferior.

We could say that Nexy Joo is more suitable for offensive chopping, while Butterfly Joo, on the other hand, performs better in control chopping. The Nexy 7-ply wood has very little vibration in defense, the thicker blade makes players have more confidence when defending.

On the contrary, the Butterfly 5-ply wood blade performs not so well and sometimes generates lots of balls out of bounds.

Normally speaking, a chopping blade is usually soft and with good spin and control for solid chop and defense.

Whereas blade with carbon or fiber is generally not suitable for chopping, so the most common chopping blade we see is a pure wood structure.

The weight of this blade is only 88g, which is perfectly acceptable for a pure wooden chopping paddle. During a match, players will not suffer from fatigue due to the excessive weight of the blade, especially choppers, who cannot afford to make mistakes during multiple strokes.

What rubber does Joo Se Hyuk use?

Many fans are curious about what rubber Joo Se Hyuk used. Joo used inverted rubber, the classic Tenergy 05 as his forehand for both chopping and counterattack.

Before he had used Tenergy 64 as well but he changed it to T05 later and I suppose it’s because in the early years he used to chop a lot and T64 is quite soft and proper for it. Later he became more aggressive and there are more counterattacks in his games. Then a little bit harder T05 is much more proper.

For backhand, he used classic long pips rubber TSP Curl P1 in his early times. But later he alternated it to Butterfly Feint Long II. Both of these long pips are really nice for chopping and you can make a reference to the review of the 12 best long pips rubbers in this latest blog.

In general, Nexy’s Joo is more like an offensive type of chopping blade, with both offense and defense, faster speed, and greater feeling.

The quality of the counterattack will be better when chopping, and the arc is lower and flat. However, players are required to have the capacity to control the ball well, otherwise, it is easy to make mistakes.

Butterfly Joo has higher fault tolerance, and more stable arc while chopping. The curve of the ball is beautiful and not easy to make mistakes. It is a comprehensive and stable chopping blade. It’s better for players who just begin to learn chop as it’s more stable.

When you have more profound understanding of chopping or long pips, or when your skill is advanced, you could choose Nexy Joo and I suppose that’s why Joo in his final several years decides to use this 7-ply blade.