The blade that we are going to test today is a new product launched by Butterfly Company on 3.1,2021 – Lin Yun Ju Super ZLC.

According to Butterfly’s official promotion: The blade woven with Carbon and ZL fiber at high density can bring a strong impact. A wide high repulsion area provides players with high power of hitting balls and stability. Lin Yun Ju, a Taiwanese player with a unique playstyle, can play high-quality flick and counter-loop in the game.

The handle of the racket is in the color he likes, and it is matched with the trademark buckle in the shape of the wings formed by his surname, implying its vigorous and upward feeling. This blade is also the only super-series blade endorsed by active players at present, so its popularity is self-evident.

Obviously, Butterfly also hopes to use this blade to open up a new market. With Lin Yun Ju’s outstanding performance at the 2021 Tokyo Olympics, this blade has also achieved great success.

Lin Yun-Ju is a Taiwanese table tennis player who has been breaking records and winning medals since he was a child. Born in 2002, Yun-Ju first picked up a paddle at the age of four and began competing in tournaments by the time he was six. 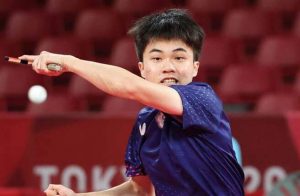 In 2013, he won the Asian Junior Table Tennis Championships in the boys’ singles competition, becoming the youngest player ever to do so. The following year, he competed in his first senior tournament, the China Open, and reached the quarter-finals.

Yun-Ju’s biggest achievement to date came at the 2021 Tokyo Olympics. Although he lost to Fan Zhendong in the semi-final and also lost to Dimitrij Ovtcharov in the bronze-medal match, his great performance impressed millions of fans over the world.

Lin Yun Ju Super ZLC weighs 86g and has a thickness of 5.69mm. In Butterfly’s Super Series, this weight and thickness are in the mid-range. The blade structure is still the classic 5+2 structure, that is, 5 plywood + 2 Super ZL Carbon. So compared with other blades in the Butterfly Super series, what is the unique characteristic of Lin Yun Ju Super ZLC? Let’s figure it out in the playtest.

In the playtest, we used DHS Hurricane 3 (39 degrees) for the forehand and Donic F1 for the backhand.

The Super ZLC fiber has elasticity and speed that you can feel through the ball’s compliance. It flies off of the blade very quickly, but in a low arc which is not high at all; however, it does have a long flight distance due to its fast 1st speed + wide range for shots in the middle and back court.

The speed of the second jump is not so good. Thus, it’s easy to have a great experience of speed suppression when playing at a close distance from the table but the speed becomes slower in the middle court or much further. Relatively speaking, Zhang Jike Super ZLC is harder and more powerful that has great speed in both short court and back court.

So obviously, the biggest advantage of Lin Yuju is its speed of the first jump and it’s suitable to do quick hits or loops in the short court. We have found that the top power of the blade is not sufficient to provide players sufficient support at a far distance from the table.

So it’s not suggested to do heavy loops under great force in the middle court or back court. In this sense, it’s relatively inferior to Zhang Jike Super ZLC, Harimoto Super ZLC, or even Lin Gaoyuan Super ZLC as there are no consistent multiple gears like its peers. However, the blade paired with proper rubber is able to wrap the ball well and generate spinny balls under small force. Especially those amateur players can lift up the backspin balls with ease. From the point of view of speed and rotation, it is in line with the playstyle of Lin Yun Ju.

By using reasonable leverage to change the placement with fast-speed balls at a close distance from the table in order to move the opponents, Lin Yun Ju is no longer a traditional player that kills the games through topspin rallies in the middle court.

Faced with the impact of the incoming ball, Lin Yun Ju Super ZLC has a great performance as it has softer surface material. And the ZL fiber can easily control the placement of the ball. Despite its speed in the middle court is not so satisfying, the blade has an excellent speed control ratio.

Players have a great feel and touch for serve return, drop-shots, or short pushes. On this basis, you can be more confident to either attack or defend. As the blade has a relatively larger sweet spot, the ball can be well-controlled quite precisely as you want.

In this aspect, Lin Yun Ju Super ZLC is superior to that of Zhang Jike, which is easier to be out of the table with a slightly larger force. 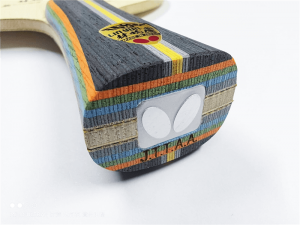 The defensive performance of Lin Yun Ju Super ZLC is quite stable. The ball can be blocked back with a low and flat trajectory that causes the opponent to make mistakes easily. As the blade is relatively soft and thinner, players can defend with more confidence, faced with the incoming heavy loops. It is suitable for players who like to control at a near-to-mid distance from the table. Its control and defense are excellent. If you are not good at looping under great strength or like to change the placement to move your opponents, this blade is quite suitable for you.

You can also do some counterattack or counter loop occasionally. However, it is not suitable for fans who pursue an extremely violent playstyle. Maybe the legendary Zhang Jike Super ZLC is more suitable for them.

Why did Lin Yun Ju choose this blade?

According to the characteristics of this blade, it is obvious that Butterfly Company developed it to strengthen Lin Yun Ju’s strengths, rather than making up for his shortcomings.

The blade is not aimed to make up for his lack of strength. But it helps Lin Yun Ju to do quick hits and passive defense in the short court. This blade once again weakens the strength and is more in line with the emerging play style nowadays. The overall offensive ability of this blade is insufficient. Its deformation ability is so so, and its speed is not as fast as that of Zhang Jike Super ZLC. It has been specifically designed for players who want a lightweight, fast-driving carbon fiber blade.

However, the control of this blade is so excellent that it doesn´t seem like a fiber blade. It abandons traditional topspin rallies in the middle court, but is more in line with the increasingly popular play style nowadays, which relies on more techniques and proper control. The combination of great control and great speed of fiber carbon is more threatening in games.