Butterfly Primorac Carbon is a classic 3+2( 5-layer) structure blade. Loads of fans say that it served as a must for those violent players. Primorac, one of the European Big Threes, used this blade to win the World Cup twice. And Werner Schlager also used it for several years in his career.

The history of this blade is about 30 years, which can be dated back to 1990. Recently, Timo Boll won the European Championships with Primorac carbon, and he had a great performance in the Olympic Games and World Table Tennis Championships. All these made Primorac carbon once again become popular and it aroused everyone’s enthusiasm for this legendary blade.

Thus, this blog will cover all the details about Butterfly Primorac carbon.

Since I was a little boy in 2000, Bol has been fighting in the Sydney Olympics. Two decades have passed now and until 2022, Timo Boll is still fighting in Tokyo.

His spirit deserves everyone’s respect. At this moment, whether he can win the championship is no longer important to us. As long as he appears in the game, the passion in our hearts will rise immediately.

Zoran Primorac is a Croatian table tennis player who has enjoyed a long and successful career. A former world No. 1, he has won numerous titles, including the World Cup, European Championships, and World Team Championships. He is also a two-time Olympic medalist, winning silver in 1996 and bronze in 2000. Primorac began playing table tennis at the age of eight and quickly showed great promise. He made his international debut at the age of 16, and by the early 1990s, he was one of the world’s top players. Throughout his career, Primorac has been known for his aggressive and attacking style of play.

He is also a skilled doubles player and has won several mixed doubles titles with partner Wang Nan. In recent years, Primorac has been serving as a coach for the Croatian national team. He has also been working with young players, helping them to develop their skills and reach their potential.

With his wealth of experience and knowledge, there is no doubt that Primorac is one of the greatest table tennis players of all time.

Butterfly is a table tennis company that produces high-quality blades. The company has blades for all different types of players, from beginners to professionals. Butterfly’s blades are made from different types of wood, and each blade has its own unique characteristics.

The Japanese giant produces a wide range of table tennis blades, from entry-level to professional-grade. The company’s flagship blade is the Timo Boll ALC, which is used by multiple world champions Timo Boll.

Butterfly also produces a number of other well-known blades, such as the Joo Se Hyuk ALC, and the Zhang Jike Super ZLC. Regardless of which Butterfly blade you choose, you can be sure that you’re getting a high-quality product that will help you improve your game.

According to the measurement, Butterfly Primorac Carbon used in the test weighs 85.6 grams and has a thickness of 6.99 mm. Its structure is different from the popular ZLC and ALC nowadays.

It is a traditional and classic 3+2 structure, namely 3 plies of wood (Kiri center and Cypress/Hinoki outer plies) and 2 plies of Tamca 5000 Carbon. The high-quality Japanese Hinoki makes the blade not only thicker but also enjoys a larger sweet spot.

Apart from that, Butterfly blades have always been known for their comfortable handles, and Butterfly Primorac Carbon is no exception. Between the flared handles and straight handles, I personally prefer the FL one because the slender handle gives me a better feel.

The fast speed of Butterfly Primorac Carbon is its biggest feature. The speed of the first jump is really amazing and excellent. It just feels like the ball moves forward quickly even under small force.

It’s worth mentioning that the backhand of this blade is really cool. The combination of speed and strength gives you a full sense of security and sense of achievement. No matter whether you loop, smash or even drive with the backhand, the ball will be popped out immediately.

As we all know that Butterfly Viscaria is widely recognized as a blade with a super great performance of backhand. But I have to say Butterfly Primorac Carbon is quite superior to that of Viscaria.

The attack in the middle court is quite violent but stable which makes you can’t stop lifting up all the backspins with your backhand! 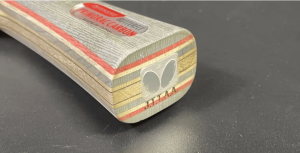 By the way, it is not suggested that you pair this blade with DHS Hurricane unless you fill it with oil or glue. It’s better paired with a tacky but softer rubber and it is especially suitable for European players who have rapid conversion between forehand and backhand, like the owner of this blade: Zoran Primorac.

The performance of spin maybe not be the advantage of Butterfly Primorac. This blade feels very tough the ball-holding is also not very decent, although it has used cypress wood on its surface.

Although the outer cypress wood is rather soft, the inner Tamca 5000 carbon is still quite hard and it makes the stiffness of the blade not so great.

As the blade fails to hold or wrap the ball very well, the ball has a rather flat and low arc. So in the topspin rallies, players have to adjust the angle and strength to ensure the ball past the net. However, there is no worry about the top power and Butterfly Primorac can give us sufficient support in strength when we loop heavily at a mid-to-far distance from the table.

In fact, Butterfly Primorac Carbon has a better feeling than the ZLC blades in terms of control. The hinoki layer makes the blade become overall soft and have a longer dwell time. So it´s easier for players to keep the ball short or change the placement much easier than the ZLC blades.

We have mentioned many times in our blog that some blades like Zhang Jike Super ZLC are super hard that once you push the ball without carefulness, it may become longer, higher, or even out of the table. Actually, the super great catapult effect of Butterfly Primorac will help you get a consistent rebound and big shots in drop shots, short pushes, or even counter-loops.

After June of last year, Timo Boll replaced his blade from Timo Boll ALC, which he had used for many years, to Butterfly Primorac Carbon. I suppose this is because Boll is 40 years old. His overall performance is not as good as before and it is impossible for him to do topspin rallies with opponents in both short and back court. 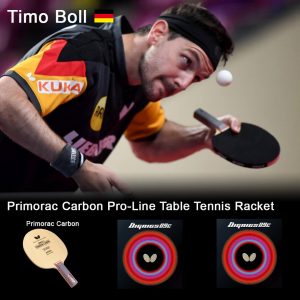 However, this legendary racket with an ultra-high-quality single stroke and extremely stable control makes up for the decline in strength and speed of Boll. Yes, the high quality of every single stroke + excellent ball control is the secret that Boll can still have great performance in his 40s.

The stiff and solid feeling makes it very comfortable for you to do active defense. You only need to put the blade there at the proper angle and the ball will be blocked back automatically. What’s more, the hard T5000 fiber makes the ball blocked back also with great speed and it’s quite offensive.

The only downside is that it is not easy to unload the force because the T5000 fiber is a very hard fiber. So sometimes players have to be careful, otherwise, the ball will easily go out. 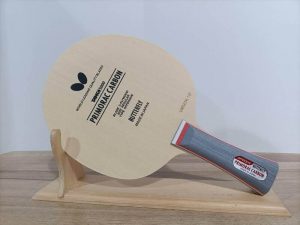 Butterfly Primorac Carbon is suitable for players who lack the ability to do offensive attacks and want to improve the quality of every single shot. It is also a great choice for players to do conversion of fore and back and play flatter strokes at a close distance to the table.

But it’s not suitable for people who rely on traditional topspin rallies in the middle court or prefer killer spin. Or maybe you can match it with some softer and tacky rubbers to make up for it.

Anyway, Butterfly Primorac is not suitable for beginners or even intermediate players as it’s extremely fast even for some pros. Ordinary players without good basic skills will find it struggling to control the ball. Butterfly Primorac Carbon is a top-of-the-line table tennis blade that offers exceptional control and power. The handle is anatomically shaped for comfort and grip, and the blade also has an extra-large sweet spot for added power. The introduction of T5000 fiber and Hinoki into the blade’s construction gives it a stiffer feel that players love.

And the extra weight provided by the carbon fiber gives the blade more mass, resulting in increased power. With its unique blend of control and power, the Primorac Carbon is a favorite among advanced players.

If you like playing close to the table and are willing to improve the quality of every single shot instead of pursuing consistent topspin loops, then Butterfly Primorac Carbon is absolutely a great choice for you.